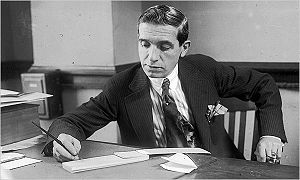 Charles Ponzi the originator of the scheme that bears his name.

TANYA DROBNESS reports in THE MONTCLAIR TIMES that a Montclair, NJ woman surrendered to the FBI yesterday on charges of running a $45 million real estate investment Ponzi scheme, the U.S. Attorney’s office in Manhattan announced.

Antoinette Hodgson, 58, allegedly bilked more than 20 investors in New York and New Jersey of tens of millions of dollars, allegedly telling her victims she was using their money to buy and renovate homes and sell them for high returns, prosecutors said.

However, authorities said, she allegedly used the money to repay previous investors in the pattern of a classic Ponzi scheme, according to a complaint unsealed yesterday in Manhattan federal court.

Between 2006 and 2009, when the solicitation allegedly occurred, Hodgson only spent approximately $6 million on residential real estate, according to court papers.

Hodgson, who is also known as “Dina” according to the complaint, was expected to appear in Manhattan federal court yesterday, authorities said.

“This case is a further reminder that whether the real estate market is up or down, innocent investors can be and will be targeted by unscrupulous fraudsters,” U.S. Attorney Preet Bharara stated.

“Antoinette Hodgson allegedly has already proven she’s a lousy gambler by losing the investor’s money in the casinos,” FBI Acting Assistant Director-in-Charge George Venizelos stated. “She has now gambled with her future and faces serious charges for a plot of her own making.”

Read More at: The Montclair Times