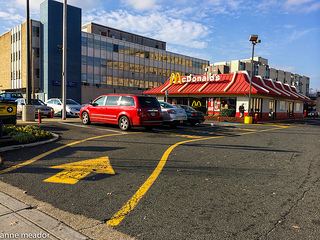 In an absolutely egregious decision rendered this week, the National Labor Relations Board continues its war against small business, ruling that McDonald’s is essentially a co-employer with its franchisees and hence, part and parcel to employment decisions – and missteps – at individual restaurants!  The decision was issued Tuesday by former labor official Richard Griffin, Jr.,  General Counsel for the NLRB, rather than the five member Board itself, but notwithstanding, it speaks to the fact that the NLRB is now essentially operating as a wholly owned subsidiary of organized labor rather than as an impartial government agency established to ensure fairness within the workplace.  The case stems from litigation filed in March against individual McDonald’s franchise owners in three states alleging multiple wage violations.  Attorneys for the workers, who praised the decision, point to the fact that all McDonald’s franchisees use a corporate-mandated software system to schedule and track employee work hours as “proof” that the company is involved as an employer along with its franchisees.  Obviously, the ruling strikes at the very heart of the franchise business model, a model which has been outperforming other businesses throughout the recovery from the Great Recession.  It also comes against the backdrop of organized labor’s concentrated protests and efforts to push the minimum wage up to $15/hour.  McDonald’s Corporate has vowed to fight the decision, as has the National Retail Association, the National Restaurant Association and the International Franchise Association, among others.