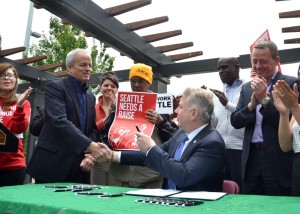 The federal court has yet to rule on the International Franchise Association’s (IFA) motion for a preliminary injunction to prevent implementation of the new municipal minimum wage law until the court hears the IFA challenge.  You will recall that the Seattle law, signed into law back in June of this year, provides a 7 year phase-in for small businesses with less than 500 employees, but only 3 years to comply for large businesses – those with 500 or more employees.  For purposes of enforcing the ordinance, the Seattle law includes in the definition of large businesses, those franchised businesses where the aggregate number of employees from all franchised locations nationally exceeds 500 employees!   We’re hopeful that the court agrees to enjoin the law’s implementation.  The United States Chamber of Commerce, the National Restaurant Association, the Asian American Hotel Owners Association and other business groups have joined onto the IFA suit with the filing of an amicus brief in support of the IFA’s position.  The IFA complaint and the amicus brief are both available online.