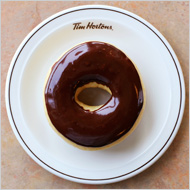 A chocolate doughnut from a Tim Hortons coffee shop in Oakville, Ontario. Photo by Jim Ross for The New York Times

Elissa Elan reports in Nation’s Restaurant News that the Riese Organization, a longtime multi-concept franchisee in New York City, is converting all 13 of its Dunkin’ Donuts stores to the Tim Hortons brand, president and chief executive Dennis Riese said Wednesday.

Riese said he plans to close the Dunkin’ locations on Friday and reopen the stores July 13 under the Tim Hortons banner. Riese and Dunkin’ had come to an agreement about five years ago that required the termination of a franchise partnership by July 31.

Tim Hortons, based in Canada, has been making a push to open more stores in the New York metro area. Most recently, the chain opened three co-branded restaurants in midtown Manhattan in partnership with premium ice-cream chain Coldstone Creamery.

In a written statement to Nation’s Restaurant News, franchisor Dunkin’ Donuts said it terminated the franchise agreement with Riese as part of a 2004 lawsuit that alleged Riese violated health and safety regulations.

“You know if there was a problem with health violations, any franchisor would immediately shut down the franchisee,” he said. “We entered into an agreement five years ago to consensually terminate our agreement on this day. If there were health violations I doubt Dunkin’ Donuts would allow this to go on for five years.”

Riese countered that the real reason for the termination was because his Dunkin’ Donuts locations were not profitable.

“The reality is we have had a lot of problems making a profit with Dunkin’ Donuts in midtown Manhattan,” he said. “A lot of it has to do with required advertising costs that are significantly higher than Tim Hortons or other chains that we at Riese have been associated with over the years.”

Dunkin said that Riese requested in 2008 the “reconsideration of the agreement to allow it to continue as a franchisee beyond July 2009, but that Dunkin’ Donuts declined to reconsider its position.”

Riese denied those claims as well.

Dunkin’ Donuts, a chain of about 8,800 locations worldwide, has 454 units located in the New York City area. It is owned by franchisor Dunkin’ Brands Inc., which is based in Canton, Mass.

“Notwithstanding the disenfranchisement of the Riese organization, Dunkin Donuts presence in Manhattan and throughout New York City continues to expand,” franchisor Dunkin’ said in its statement. “In the past five years, 244 new Dunkin’ Donuts shops have opened in New York City, and we intend to continue this pattern of growth as opportunities arise.”

Other Articles about Riese Organization Switching from Dunkin’ Donuts to Tim Hortons:

The Morning Doughnut? The Choices Are Getting Complicated NY Times