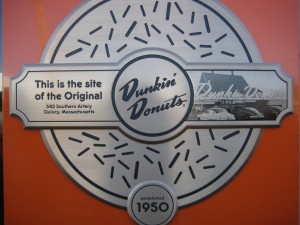 On December 1, 2011, The Carvalho Group celebrated the Grand Re-Opening of the original Dunkin’ Donuts shop on Southern Artery in Quincy, Massachusetts. The location recently underwent a remodel, including a “retro” façade and the addition of horseshoe counter seating alongside state-of-the-art digital menu boards and new product display cases. Co-owners Victor and Octavio Carvalho stood proudly together with their families in a crowd of local dignitaries, community members, Dunkin’ franchise owners and representatives of Dunkin’ Brands. The brothers beamed with pride.

“I always knew today would be special, but I never dreamed it would be this grand,” said Octavio.

Costello congratulated the Carvalho brothers and spoke of the location and brand’s rich heritage and bright future. “Franchisees like Victor and Octavio are our secret weapon. They are the ones who build a bond with Dunkin’ guests and with the community,” he said. “Today captures the best of the old and the new. We couldn’t be more proud of what this store represents.” 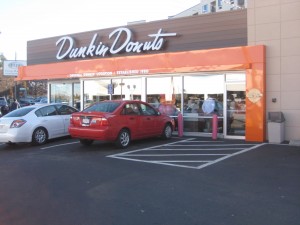 Quincy Mayor Tom Koch, State Senator John Keenan and Representative Tackey Chan followed Costello, expressing their congratulations and sincere appreciation for all the Carvalho brothers do to support the community. Each also shared his thoughts on the history and outlook of Dunkin’ Donuts in Quincy. “It seems to me the future is yesterday and it starts right here,” said Chan.

The final speaker, Victor Carvalho, received a rousing ovation as he took the podium. Victor spoke of his family’s involvement with the franchise, which began when his and Octavio’s father, Jose, took over the Southern Artery shop in 1979 from Hy Schwarz, brother-in-law of Dunkin’ Donuts Founder Bill Rosenberg.

“Octavio and I grew to understand what our family had—the history of the brand and this location. We take great pride in being able to say we own and work in the first Dunkin’ Donuts,” he said. “I can’t say enough about our team and our guests. Our guests are unique because they have an emotional connection with Dunkin’ Donuts. It’s a brand they love and want to come back to every day.”

At the close of his remarks, Victor invited his brother to join him to present a $5,000 check to Kathy Quigley and Claire Brennan of the Germantown Neighborhood Center (GNC), one of the local charities the brothers support. Since 1982, the GNC has provided critical services to youth and families in the Germantown community of Quincy.

At the close of the ceremony, guests gathered for the re-dedication of a plaque commemorating the location as the site of the original Dunkin’ Donuts and proceeded to tour the remodeled shop. 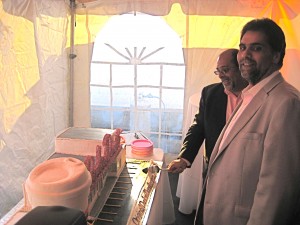 At ages 12 and 14 respectively, Victor and Octavio began working at the store on day one of their father’s ownership. “We fell in love with it immediately,” Victor said. The brothers officially took over the franchise when their father retired in 1994. Now, Victor’s 20-year-old son works at the store while also attending Salve Regina University.

When the shop came up for its 10-year remodel, the brothers approached Dunkin’ Brands with the idea of doing something special to commemorate the historical nature of the location. Together they planned this one-of-a-kind retro remodel. To achieve the makeover, the store closed for 11 days before unveiling its new look last month.

“We’ve always been proud of this shop, but today surpassed our expectations,” said Victor. “We couldn’t be more proud to have the support of the community, our fellow franchisees and Dunkin’ corporate. We’ve all been on the same page working towards the same goal, and it all came together today in a big way. It’s such a great feeling.”