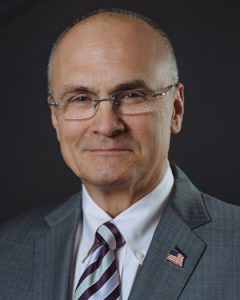 Andy Puzder is widely credited with turning around the troubled quick service restaurant chains of Hardee’s and Carl’s Jr. By the time he left his position last year – and was being considered for the position of U.S. Labor Secretary – Puzder had earned a reputation as a smart restaurant operator who understands the challenges government regulations create for small business owners. Dunkin’ Donuts franchisees will be interested to hear Puzder’s views on politics, business and food when he takes the stage as the keynote speaker at the 2018 DDIFO National Conference in New Orleans this June.

Puzder started his career as a trial lawyer in St. Louis and, in 1986, became the personal attorney for Carl Karcher, the founder of the Carl’s Jr. chain. In 1997 CKE, the parent company of Carl’s Jr., made a strategic move and purchased Hardee’s restaurants. The deal burdened CKE with $700 million in debt and led to a tumbling market capitalization. That led its board of directors to tap Puzder to run the newly combined company.

Puzder is credited with engineering a turnaround at Hardee’s, which many had seen as a distressed brand, and delivering solid returns for CKE. In fiscal year 2016, CKE’s company-owned and franchised restaurants generated $4.3 billion and employed over 75,000 people domestically and over 115,000 worldwide.

In 2010, Puzder co-authored the book, Job Creation: How It Really Works and Why Government Doesn’t Understand It. His second book, The Capitalist Comeback: The Trump Boom and the Left’s Plot to Stop It, was released in April. Pudzer is a frequent commentator on CNBC, MSNBC and Fox News and writes for The Wall Street Journal, Forbes and Investors’ Business Daily, among others. He believes the joint employer rule and the push to increase both the minimum wage and overtime pay would have a negative impact on the service industry and its employees.

“With government driving up the cost of labor, it’s driving down the number of jobs,” he told Business Insider in 2016. “You’re going to see automation not just in airports and grocery stores, but in restaurants.”

Puzder has said he isn’t sure he could have engineered the CKE comeback today because of today’s government regulations. In a 2016 article in Franchise Times he said, there are a number of factors working against the restaurant industry. Restaurants are labor-intensive, and therefore, while other industries such as grocery stores are benefiting from lower food costs, restaurant margins tend not to improve because of the extra cost of employees. Government regulations punish businesses that hire the most workers, and reward the ones who hire the least, he added. The result of higher labor costs is fewer jobs, he said.

Having left the corner office at CKE and moved into the world of politics and punditry, Puzder echoes many of the same sentiments shared by the Dunkin’ franchisee community.

Since President Trump took office last year, as media spokesperson for the White House, Puzder has been very supportive of the President’s successful efforts to shrink the size of government, reduce regulations and cut taxes.

Puzder is looking forward to speaking at the DDIFO conference this summer. “I’m always happy to speak with entrepreneurs but speaking to the Dunkin’ franchisees will be a particular honor” he said. “There isn’t a more respected group of operators in the industry. I’m looking forward to sharing some thoughts on the strength of our free market economy and hearing what’s on the minds of a group of entrepreneurs who are succeeding on the front lines of our free market economy everyday.”