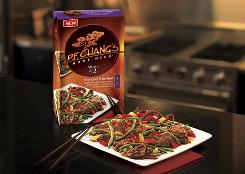 P.F. Chang's and Unilever are offering meals for two in the frozen-food section.

Bruce Horovitz reports in USA TODAY that some of the most familiar names in the restaurant world are moving into the grocer’s freezer.

P.F. Chang’s, Burger King and Jamba Juice all have recently licensed their names for new products to be sold in supermarkets. They join other high-profile restaurant chains including Marie Callender’s, Starbucks, T.G.I. Friday’s and California Pizza Kitchen, which already have substantial presence at the grocery store.

The most recent moves come at a time when many former frequent diners — scared off by the recession — are not returning to restaurants. “It’s a search for new revenue streams,” says Robin Lee Allen, executive editor at Nation’s Restaurant News. “It’s also a way to keep the brand top of mind.”

It’s also a way for a chain to familiarize consumers with the brand before entering a new market with restaurants, consultant Linda Lipsky says.

New freezing technologies that are better at keeping items tasty have made the grocery’s frozen-food aisle almost a “no lose” proposition, says Bob Garrison, editor of Refrigerated & Frozen Foods, a trade magazine.

Among the newer name brands at markets:

•P.F. Chang’s. Even with new methods, frozen food isn’t going to taste exactly like fresh — which makes Chang’s deal with Unilever to make eight frozen meals-for-two ($7.50 to $10) compelling. Chang’s, with 172 restaurants in 42 states, has built its reputation on offering great taste in its food. The question is, can Unilever’s new freezing technique do the trick?

“There were enormous discussions,” says Michael Welborn, head of global brand development. “We can never do anything to tarnish the brand.”

Based on its success with the Bertolli Italian frozen-food line, executives at Unilever convinced Chang’s that they could work the same magic on its Asian entrees. But, says Gaston Vaneri, frozen-foods marketing chief at Unilever, the company also needed Chang’s name recognition and its know-how to make a frozen Asian food line a hit.

•Burger King. The chain recently teamed with the ConAgra Foods Lamb Weston division and rolled out King Krinkz seasoned crinkle-cut fries — cooked in the microwave — for $1.10. The focus is “to reach consumers through new channels” and give them “new ways to connect with the brand,” marketing chief John Schaufelberger says.

•Jamba Juice. The chain, with 750 units in 22 states, has a line of Frozen Fruit Sorbet & Yogurt bars made by Oregon Ice Cream. A box of four, 2.5-ounce bars costs $3.99. “The driver is to extend the Jamba brand and to let the consumer enjoy Jamba in more ways,” CEO James White says.