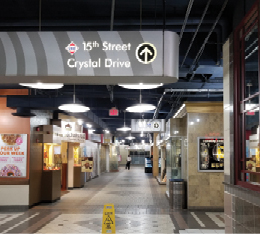 On a typical weekday, any Dunkin’ in an urban setting would be bustling: walkers, commuters awaiting public transportation, tourists, and students would populate the register lines while the plan-ahead types would breeze in and out of the mobile pickup station. But since the COVID-19 pandemic first prompted shutdowns across the U.S. in March, urban franchisees have been facing a very different scenario.

“Schools closed. Businesses and government offices began telling workers to work from home. Government workers (coming into the office) went to 80 percent, 60 percent, 40 percent. Outside of the government, other things were also shutting down,” says Jerome R. Johnson, who along with his father, a retired Army lieutenant colonial also named Jerome, operate 10 stores: two inside the Pentagon, two in other high-traffic DC areas, and six in northern Virginia. “I was scared,” he admits. His customer flow – largely drawing from those workers – dropped in parallel with the disappearing workforce. “[One of my stores] looks out to a food court which had 1,000 tables, all of which have been removed. It’s empty,” Johnson says.

While he was able to keep all his stores open throughout the worst of the shutdown, he did reduce their hours of operations. “The business community is coming back now, perhaps at 50 percent,” Johnson reported at the end of summer.

That experience will sound familiar to franchisees in major urban areas, who, almost in a flash, saw their robust, workweek walk-in traffic vanish. Across the country, restaurant owners of all kinds experienced an unprecedented, abrupt halt to business. Urban establishments, which not only depend upon the continued operations of neighboring businesses and schools, but which are short on extra space needed to implement new pickup options, have been among those hurt the most by changes in behavior brought on by the coronavirus pandemic.

A New Challenge: Handing Over the Order

Since the outbreak began, we’ve seen how Dunkin’s reputation for fast service plus its popular mobile app positioned the brand to meet the new demands imposed by the pandemic. During its Q1 earnings call, Dunkin’ reported nearly 20 percent of sales came through the On-the-Go platform during March and April. But franchisees with locations in central business districts faced an unprecedented challenge: finding contactless ways to serve customers.

The solution, of course, has been to ramp up curbside and delivery service where drive-thrus are not an option. Well before COVID-19, Dunkin’ had been field testing curbside service in certain locations. By the time the pandemic was in full swing, more and more Dunkin’ shops began offering curbside service. By the end of the second quarter, Dunkin’ reported curbside ordering represented 2.4 percent of sales in the 1,400 stores that offered it.

“Curbside operations helped keep us afloat,” says Johnson, whose DC-based stores do not have drive-thru options. “Customers pull up to a ‘ghost stall’ for their food. It’s completely contactless, so it protects employees as well.” His Northern Virginia store, already equipped with a drive-thru, helped bring in a needed boost to revenue.

Franchisee Shaun Cain, part owner of 40 stores in the New York City borough of Queens and Long Island, as well as 35 in Connecticut, experienced the situation from two sides. In Connecticut, where 10 stores had a drive thru and most have space available to establish curbside pickup, business picked up faster. But establishing contact-free interactions at his New York stores proved to be more of a challenge; only four of those urban stores had a drive-thru in place, and most lacked the space necessary to establish curbside pickup.

“These stores are on main streets, there’s no room for parking. We implemented curbside where we could, but that’s not much of an option,” Cain says, noting instead he used delivery services such as Grub Hub and Uber Eats, which brought in some revenue.

While some of Cain’s New York shops closed initially, most have re-opened. “Still closed are two in malls, which are still closed; one across from the courthouse and in front of a mall; and one on the bridge to Manhattan,” he reports. Also presently shuttered is the overnight shift in stores that previously drew late night customers from all-night subway operations—paused in the “city that never sleeps.”

Adapting new means of delivering the order has become the norm at restaurants across the country. According to a survey of 426 restaurant owners conducted in late March by Datassential, 59 percent said they added curbside pickup since the pandemic, 34 percent added contactless interactions, and 22 percent signed up with third party delivery services.

New York was hit early and hard with COVID-19 cases, and many of Cain’s stores felt the fallout. “Half of my New York stores are in the Queens area, the epicenter of the outbreak. We’re near two hospitals. People were scared to come out.” And, that included employees.

Cain witnessed a tremendous loss of employees. Many workers were too scared to come to work, while others were forced to stay home to accommodate displaced school children and uprooted family routines.

“Of my 400 New York based employees, about 350 quit,” Cain says. “They were afraid. Why come out and risk a life-threatening virus, if you can stay home and collect unemployment?”

The company started holding weekly hiring fairs to replenish the lost workers. “I’ve hired about 500 employees in over two months. Some workers are good—people who used to work in restaurants that are closed, but they want to keep working. Others came and quit again,” according to Bob Anderson, the chief operating officer for Cain Management. The company has recently seen some of their previous employees return to work, and are close to being back to fully staffed.

Down the coast, Johnson was facing a similar shortage of employees. “We couldn’t stay open even if we wanted to, we simply didn’t have the people.” Johnson says he tried to show his workers he understood the situation from their perspective. “We’re a people-based business, so I stood behind my employees. They are essential. If they decided to come back to work for us, I welcomed them.”

Finding employees has been a challenge, made worse by the absence of college students this fall. It’s forced him to seek younger workers. “I’m glad to be able to offer the high school student their first job,” he says.

The one-time hum of Dunkin’s early morning business has largely disappeared. Few customers arrive pre-dawn anymore, as they are no longer bound by a commuter schedule.

“If you’re just heading downstairs to turn on a Zoom meeting, you don’t come out in the morning for coffee. The Queens area is quiet,” says Cain, adding that instead of booming at 7:00 a.m., Cain sees business pick up mid-morning. “It’s not busy, but it’s not slow. This is consistent through the midday, then dies off earlier than it used to.”

“Parents going back to work, people going to and from the schools amounted to 70 percent of business [in New York City],” Cain says, while voicing optimism that once schools resume, business will begin to stabilize.

Most franchisees are doing their best to adapt to these new patterns and remain open as much as possible. According to QSR Magazine, as of July 31, “Fewer than 70 traditional Dunkin’ locations were shuttered, mostly in New York City and Boston. Additionally, about 300 were off-line in transportation hubs and college campuses.”

Welcome support from the brand

“Our newer markets, such as parts of the Midwest, Southwest and West, are recovering much faster as they have significantly more drive-thrus and are experiencing strong beverage sales. Our urban markets, like Manhattan and Boston, are both still challenged, as offices and businesses remain closed. Sport facilities, transportation hubs and college campuses remain closed as well,” she reported, adding that efforts to support the urban franchisee will continue.

“We have seen slight sales and traffic improvements on a week-to-week basis in many of these [urban] markets, although sales in most downtown business areas have been slow to return close to pre-COVID levels,” Jaspon said.

“Every week we’re on a call with leaders from the brand. They gave us info on steps to take and what was available to us. I’m happy to be a part of this franchise,” Johnson says. “As a brand, we’ve always been ahead of the curve. They sent us masks early on, and we were one of the first restaurants to install Plexiglas dividers thanks to our local leaders,” identifying Bill Laird and Julian Dejesus from Dunkin’ Operations. Cain called out “Ashley Coneff and her team from government affairs, Peter Green, the regional VP, Dave Hoffmann and Scott Murphy. They all went out of their way to get us information and explain things, as well as to be reassuring and keep us calm,” he says.

Big-city franchisees are doing what they can to get people back into their stores, including maintaining robust hygiene and sanitation practices. Surviving a once-in a century pandemic and record unemployment requires establishing new routines and testing new methods of operation, but as long as office buildings and schools remain closed, stores that rely on urban foot traffic will welcome fewer customers through their doors.

Despite the upheaval, most franchisees are trying to keep a positive outlook and find the silver lining where they can.

Johnson was happy to observe his Northern Virginia store become an outlet for the nearby population when everything around them was closed. “Some guests made an outing of it, they’d get their order and set up with a lawn chair outside at a distance. We were glad to be a destination for people who were tired of being stuck in their houses.”

Cain is hoping to see continued improvement as business and schools edge back to their prior schedules, but he realizes it’s not going to change overnight.

“The biggest thing is for people to feel secure again. It’ll take time and a vaccine to get back to normal,” says Cain. “We’ll get through this storm; this too will pass. We’re all in this together.”