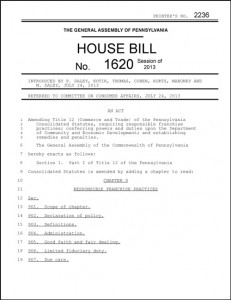 The Consumer Affairs Committee of the Pennsylvania General Assembly held their hearing this week on HB 1620, a fair franchising proposal sponsored by state representative Peter Dailey, a former Quiznos franchisee.  About 2 dozen franchisees from a broad array of brands listened as DDIFO and CFA Chairman Keith Miller supported passage of the initiative.  As expected, opposition to the legislation which would level the contractual playing field for franchisees was led by the International Franchise Association.  The IFA essentially testified that the bill would end civilization as we know it and destroy all that is the franchise business model.  The hearing was broadcast throughout the Commonwealth of Pennsylvania, but the link is not available currently.  We will provide the link to you as soon as it is back up and running again as the testimony on both sides is telling!  Interestingly, a day or two after the hearing, the IFA congratulated itself on its weak testimony with a press release declaring that they had “delivered a strong message”!  The bill remains in the House Consumer Affairs committee, whose Chairman said he may hold a 2nd hearing on the bill to delve more deeply into the particulars of the proposal.  We will keep you posted on future developments!