The mural illustrates Muncy’s early days when donkeys and canal boats moved goods through the region.

On the wall in Ann Caruso’s family room hangs a pastel of a conservation area in the town where she lives. She loves it not because the colors match the ones in her rug, though that’s nice, too, but because it’s a walk she has taken with her husband and kids many times. It’s the feeling she gets when she looks at the picture, a feeling of belonging and joy, that make that particular picture the absolute right one for the room.

That’s the feeling Jim Bower was going for when he commissioned a mosaic for his refurbished Dunkin’ Donuts store in Muncy, Pennsylvania. “I wanted to create a meeting place,” Jim says, “a place that everyone in the area would want to go.” And he wanted to infuse it with artwork that would speak to the community. A community that is primarily rural, one that goes back hundreds of years, with a population that is fairly spread out.

Bower is a thoughtful man, one who clearly cares about more than just serving the best coffee and donuts around. He thought carefully about how his shop should integrate into its community. 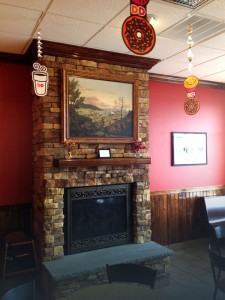 Muncy is actually three small communities, each with about 4000 residents, spread over a wide area of rural Pennsylvania. According to Bower, you can drive for miles and miles seeing nothing but rolling farmland, certain you’ve gone the wrong way, when –suddenly— a store pops up and you breathe a sigh of relief, knowing you’re not lost.

But in the middle of all this vast space, the roads leading from the different towns all converge on the corner where Bower has his Dunkin’ Donuts. “When I looked at that building, I knew that’s where I wanted to go,” said Bower. “It’s on the way for everybody.” Unlike towns with dense populations, where people are frequently passing by and congregating in retail areas, Muncy’s geography makes a casual stop at a coffee shop a little more challenging. Says Bower, “You have to run stores in a way that brings people in more than once a month – you have to execute at a high level.”

So Bower set about making his shop a destination, a place people would want to make an effort to get to, as well as one that would attract people driving from one town to the next.

He began by completely gutting the building, and then creating an attractive meeting place, with a soaring cathedral ceiling and a fireplace. Much different from the urban stores most people are used to. Given the area’s rich history, Bower went to the historical society to fold that aspect into his shop. According to Bower, this is an area with pride in its history, its farming background, so much so that even as small as their population is, they have a museum in town, one that commemorates their community. He wanted to honor that in his shop.

Lucky for Bower, the historical society gave him access to a number of old, old pictures of the town in its early days, which he had professionally reproduced and framed to hang on the walls. And when he wanted something special to fill the space over the fireplace mantel, something appropriate to the history of the community, the historical society obliged with an original 1852 painting of Muncy Valley. It was the first time in 160 years that someone had been allowed to make a copy of that painting.

Bower not only copied it – and hung the piece over the mantel in his Dunkin’ shop – he gave the negative to the community for them to use to make posters and postcards to sell. Just another way for Bower to support the community that would eventually support his store.

Still, even with all these great photos and prints, Bower had a bigger wall to fill: the six by twenty foot flat wall in his cathedral ceiling area. A wall that needed something much bigger and much more eye-catching. So Bower approached two local, well-known artists and asked them to fill the wall with an historical picture.

The artists, Nella Godbey Storm and Selinda Kennedy, have worked together before, and were featured in Muncy’s juried art show in the fall of 2011. In fact, they have done mosaics for other buildings, finding them a good art choice for restaurants especially because the tiles are easy to clean. Mosaics are made up of hundreds or thousands of tiles, ranging in size from about an inch to five inches, each one painstakingly painted and coated with clear glaze, one tiny piece of the picture at a time.

Creating art this way takes time; the piece for the Muncy shop took four months. Bower wanted the artwork to weave in the history of the area, complementing his other pieces, and so the artists focused on a canal scene.

Long before the railroad went through this area, canals were the preferred method for hauling goods long distances. The central theme of this mural is a canal boat being pulled by donkeys, but the overall mural is so much more.

“It has lots of flowers and animals of all kinds, in vibrant colors,” Bower said. “It’s meant to be historical but engaging; something you could look at for hours,” perfect for enticing people in to linger over coffee, with a whimsical quality that makes it appealing for kids as well as adults. 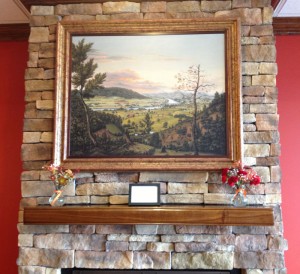 But Bower wasn’t done connecting with the community. His construction was overtaking the area his shop shared with a local gas station; to entice people to keep frequenting the station, Bower offered to supply the coffee. Even better, he tied it into a local fundraising project headed by the historical society, the same one that provided him with all the great artwork for his store.

The town needed money for a nature trail and boat dock they were building down by the river. Since the new mural would be a depiction of this area when it was still a canal, it was a perfect tie-in to let people know, while they were buying gas and getting their free coffee, that they could donate to the renovation of the same area. Bower and the gas distributor would then match those donations up to $10,000. Much to everyone’s surprise, people donated $10,000, which Bower and the gas distributor matched, for a total donation to the town of $20,000. The town itself then came up with another $16,000, and that new amount – $36,000 – doubled in value as a result of a government match. Bower says the $72,000 collected for the project really came about because they were giving away free coffee.

This is what Bower loves: connecting with the people and the customers. To that end he provides fresh donuts all day and all night. His store sales at 3pm and 6 pm are completely different, and better, than many other stores.

“I know I’m not going to make as much money,” he said, “but overall I will have higher sales.” That’s evident by the reaction from customers, all of whom have been positive about the shop. By connecting with the town, and the historical society, as they were building, Bower and his crew created a place that people were excited to see open.

Before he completely finished construction, Bower decided to sell: it was time for him to retire. But it wasn’t in him to sell to just anyone; he wanted someone who was as committed to community as he was.

And after going through countless people who wanted to buy, he found his perfect match in Jerry Forger. Forger took over the shop and finished the work Bower had started.

Forger is no stranger to Dunkin’ Donuts, owning seventeen stores before this one. He loved what Bower was doing with this store, in part because it’s similar to things he’s done in his other locations. Their philosophies are strikingly similar, so much so that they finish each other’s sentences. And he echoes Bower’s sentiment that it’s the connection to community that makes stores like this one so successful.