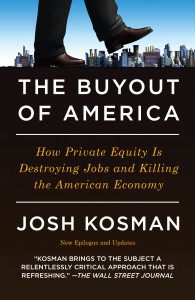 Josh Kosman’s new book is called “The Buyout of America: How Private Equity Is Destroying Jobs and Killing the Economy.” As a business reporter specializing in private equity, mergers and acquisitions for the New York Post, Kosman has specific insight into how private equity firms buy and sell companies and what happens to those companies as a result.

Kosman has written extensively on Dunkin’ Donuts and the recent IPO and will be a featured speaker at the upcoming DDIFO National Members Meeting on September 20, 2011 at Mohegan Sun.

“There is a risk when a company like Dunkin’ is owned by private equity firms that the owners won’t reinvest their profits back into the brand,” said Kosman. “There is pressure for growth not just to satisfy the private equity owners but also for the shareholders. Private equity companies care about how the stocks in their portfolio perform because it tells them what real value of their investment is. If they sell too many shares the value goes down. It creates artificial demand, and in the case of Dunkin’ Donuts, it worked.”

Dunkin’ Brands has made it clear that their strategy for growth is expanding into territories beyond the traditional development triangle that runs from New England to Chicago to Florida. Kosman points out they’ve tried to expand for years but now there’s added incentive because every move is being watched by analysts and investors.

“If I was a Dunkin’ franchise owner I would be concerned about how Dunkin’ Brands will attain the growth necessary for a publicly traded company to demonstrate value to shareholders,” said Kosman. “Will it mean that K-Cups will be sold through other channels? I don’t know but if I were a franchisee, I would wonder.”

Kosman believes private equity firms make fortunes by starving the businesses they own. He cites Domino’s Pizza and Burger King as examples. In the case of Domino’s which Bain Capital, one of the trio of firms that still controls 78 percent of Dunkin’ Brands,  bought in 1998 Kosman says, Bain—after introducing 30-minute delivery—sat back and collected its profits and did not improve the product while the company lost market share. Five years after going public, in 2009, the company set about reinventing itself with a new recipe and a focus on ingredients—not just its 30-minute delivery guarantee.

In the case of Dunkin’ Donuts, Kosman says, the private equity groups timed their IPO pretty well. “When Dunkin’ went public other specialty retailers like Francesca’s Holdings, a women’s boutique, had already popped 63% on their first day of trading which showed that specialty retailers are a flavor of the day for investors.”

In his upcoming talk at the DDIFO National Members Meeting, Kosman says he plans on discussing private equity’s track record in restaurant companies and what is to be learned from examples like Domino’s and Burger King. He says he wants franchisees to better understand exactly what they’re dealing with now that Dunkin’ has become a publicly traded company with the private equity trio maintaining majority ownership. At the time Bain, Carlyle and Thomas H. Lee purchased Dunkin’ they paid approximately 13.5 times EBIDA and was criticized for the price of the purchase but, Kosman points out, today it’s trading above that multiple.

He also will address future competition for Dunkin’ as the company looks to expand its number of stores. Specifically, he says, Tim Horton’s the Canadian-based coffee and donut chain is lining up as a direct competitor—along with McDonald’s and Starbuck’s—with its aggressive growth plans and lower debt to earnings ratio.

Kosman says it is clear Dunkin’ Donuts franchisees have demonstrated how to use their power as an influential stakeholder. He points to the firing of Steve Horn as one example of how franchisees used their collective strength to exert pressure on the company at a time when negative media reports of excessive litigation roiled the company’s leadership.