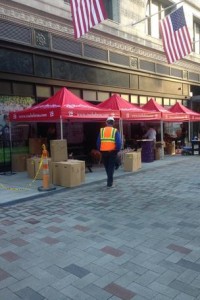 In a recent decision that may shock private property advocates throughout the country, the Massachusetts Supreme Court released its decision in the case of Glovsky v Roche Bros. Supermarkets, Inc. in which they essentially determined that private property would qualify as public space for the purpose of access in those cases where the private retail operation offers a broad enough array of departments and products where they should be considered public in matters such as collecting signatures for political activities!  In this specific case, in which the state’s highest court overturned a lower court ruling, the defendant Roche Bros. a supermarket owner of private property where the store is located, prohibited signature gatherers from doing so on the property.  Because it is bordered by a private parking lot, signature gathers complained that they couldn’t get close enough to the customers to speak with (harass?) them about signing their petitions and that such constituted an illegal restriction!  Is that not the point of private property, to do with as the owner wishes???