By AdminPublished May 10, 2014Category Minimum Wage, Small Regular – No Sugar! 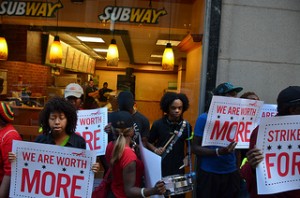 The Wall Street Journal reported this week on a plan by SEIU (Service Employees International Union) to push another wage strike by fast food workers next week across the country.  In another article, it is reported that McDonald’s workers in up to 150 cities across the US are planning a strike for this Thursday and Friday, May 15 and 16.  The article also quoted a letter from the International Union of Food, Agricultural, Hotel, Restaurant, Catering, Tobacco and Allied Workers’ Associations, a federation of trade unions comprising 396 organizations in 126 countries.  The letter claimed that the protests, which will target Yum Brands restaurants as well as McDonalds and possibly others, will be held in 33 countries around the world.  A list of some of the targeted restaurants in various countries around the world was released by a PR firm handling the issue for the protesters.  Although there have been no reports that Dunkin’ shops are on the target list, be on guard that your shop may indeed be targeted.