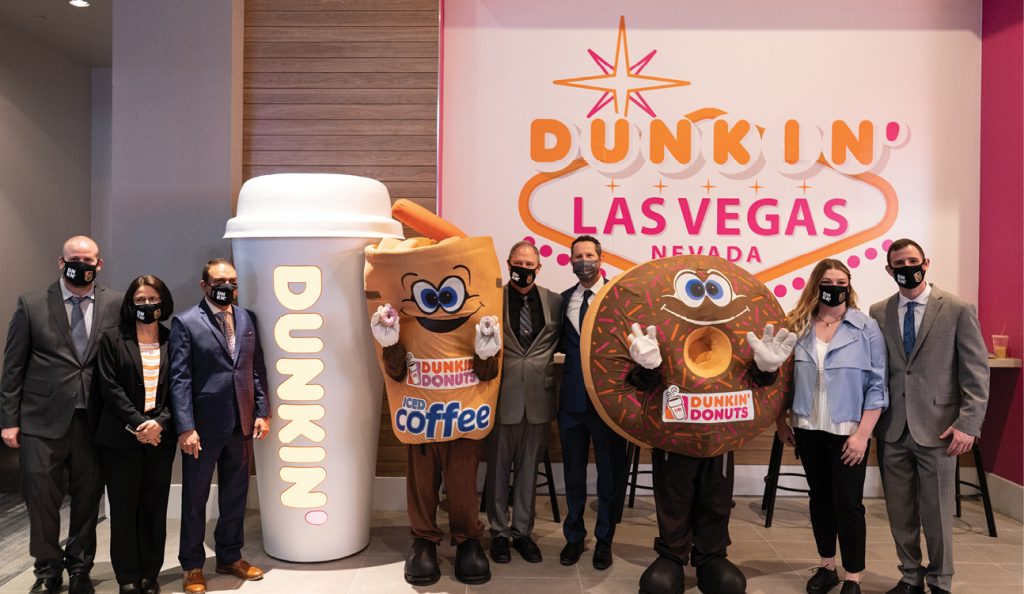 After winning at the casinos, shopping in the boutiques and taking in a show, visitors to Las Vegas can now recharge with their favorite beverage and snack from Dunkin’. Last month, franchisee Greg Novak opened two new Dunkin’ shops on Las Vegas Boulevard, making them the first of their kind on the world-famous Strip. Previously, customers had to travel one-and-a-half miles off the boulevard to get to the nearest Dunkin’.

Now, visitors can find Dunkin’ at the LINQ Las Vegas Hotel + Experience, which includes 20 floors with more than 2,200 rooms. The resort currently has four restaurants and four bars onsite, making the two walk-up, Next Generation Dunkin’ locations a quick and unique option for visitors to grab and go. Both Dunkin’ locations are approximately 800 square feet in size with 12 employees each to keep them running. Both Dunkin’ shops are located where plenty of people are wandering around. One store is located off the Strip-facing side of the LINQ and the other shop is next to the Caesars Forum entrance side on the casino level. Caesars Forum is a 550,000 square feet conference center. 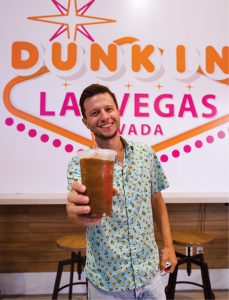 “[We are] extremely excited to bring our powerful brand to the busiest street in the world. Our customers need us daily especially when they are visiting Las Vegas,” Novak said in email responses to questions from Independent Joe.

The stores are owned by a local franchisee network, The NVGRE Group, which currently owns and operates 13 Dunkin’ locations throughout Nevada and Illinois. The group plans to open five more Dunkin’ locations in Southern Nevada this year.

Fit for the Strip

While demand dictates some of his stores stay open 24-hours a day, Novak says he isn’t yet sure if the Vegas Strip locations will be brewing and serving around the clock. “We want to be available when our guests’ demands need to be met. We will be making that determination soon,” he told us.

No matter the hours, he believes Dunkin’s reputation will appeal to tourists in America’s playground who are looking for a cup of coffee, a specialty drink or snack to supercharge their visit. “Dunkin’ is a powerful brand and our guests not only love our coffees and donuts, they crave them as well,” he wrote.

While he didn’t get into specifics, Novak told Independent Joe he expects to sell a lot of donuts and sandwiches to the millions of tourists who visit Las Vegas every year. And he anticipates the beverage line will keep Las Vegas running on Dunkin’.

“Our Espresso line, our new Novak Infused cold brew, and our Signature Hot & Cold coffees are just a few products we believe will be a great attraction to all,” Novak told us.

His goal is to operate the Vegas locations like his traditional restaurants, even though the action outside these shops is unlike anything at those other locations. The two Vegas shops have a full menu and will fulfill orders made using the mobile app. According to Novak, his team wants to offer a seamless experience to regular Dunkin’ customers. 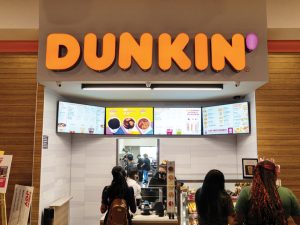 “Our guests will be able to get what they want, just like at their Dunkin’s in the communities in which they live. [It is like] a continuation of their daily lives,” Novak said. “This is a feat that is important to our guests because, when they come to us, their expectations from our brand must be met. We must satisfy their daily routines.”

Novak believes customers will appreciate one added perk to his locations. It is what he calls “Instagram-able photo memories,” made possible by the design and decor of the dining areas on the Strip. “Our guests will say, ‘Wow!’” he promised

However, there is one thing guests to Novak’s new locations on the Las Vegas Strip will not get—the opportunity for non-stop gambling. When we asked him if customers would be able to find slot machines in his shops, Novak conceded that was not going to be his forte.

“Our partner, Caesars Entertainment, will be providing this wonderful entertainment,” he said.

Welcomed by the Strip

Dan Walsh, SVP and general manager of The LINQ Hotel + Experience, told Nevada Business the resort is honored to have the first two Dunkin’ locations on the Strip. “These new locations will benefit not only our hotel and CAESARS FORUM convention guests but also all Las Vegas visitors, with our resort situated right at the heart of the action,” the paper reported.

Alexandria Dazlich, director of government affairs at the Nevada Restaurant Association shares a similar sentiment. Dazlich told Independent Joe, she thinks the Dunkin’ stores will be a great addition for tourists and locals alike. “In addition, we are encouraged that in the midst of so many restaurant closures, establishments like Dunkin’ continue to operate and safely serve the public while keeping them caffeinated and fed,” she says.

Dazlich believes visitors will embrace the new Dunkin’ stores with open arms, particularly the East coast visitors who have brand loyalty to Dunkin’. Additionally, she says a sizable portion of visitors from the Mid Atlantic visit Las Vegas regularly, and she anticipates them also embracing the brand.

“Many people are particular about their coffee, so having a diversity of choice is always a good idea,” Dazlich says. “When people think of Vegas, they automatically associate it with a nonstop, good time. Dunkin’ keeps people awake for those good times.”