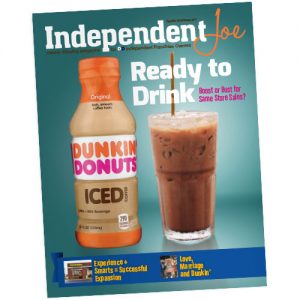 Last year, sales of ready-to-drink coffee continued its meteoric rise—jumping 14 percent to $2.5 billion. It was the fourth straight year of double-digit growth. No Dunkin’ Donuts franchise owner would be surprised to learn that Starbucks controls 75 percent of the ready-to-drink coffee market. It’s why franchisees were generally pleased to hear the news that Dunkin’ Brands sealed a deal with Coca-Cola to brew, bottle and sell iced Dunkin’ coffee in retail stores across the U.S.

According to Steve Holtz, the beverage editor of CSP Daily News, the timing is right for Dunkin’s foray into the expanding ready-to-drink category.

“There is room to grow here for manufacturers and brands. All of them are chasing Starbucks, but Dunkin’ Donuts has a strong brand that can be a fair challenger to that.”

Starbucks began selling its bottled Frappuccino in the 1990s and has enjoyed strong profits from the frothy coffee beverage not just in its own stores, but also in convenience stores and supermarkets. Holtz says Starbucks learned early on that ready-to-drink (RTD) coffee was a way to advance its brand beyond its own cafes. 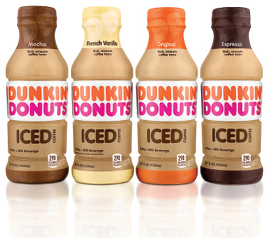 “They put it out on the retail side and it hasn’t leached into their made-to-order business yet. And, it’s probably created a different customer, one who wants to grab-and-go and likes the flavor as well as the cost and convenience. Overall it’s been great for the Starbucks brand,” he says.

Frappuccino put Starbucks on the shelves in convenience store coolers as an alternative to soda, vitamin water, iced tea and sports drinks. For c-stores, profits from the sale of coffee – fresh brewed and bottled – is second only to food products. Industry watchers say c-stores want to expand their offerings of hot and cold coffee products in order to capitalize on the coffee trend. Holtz says the c-store operators are optimistic the Coke-Dunkin’ deal will be a winner for them. And, because Coke already delivers to their stores, it won’t require a whole new set of logistics.

Coke is hoping the Dunkin’ deal will sweeten its bottom line. Soda sales continue to sag as coffee continues to climb. Over the years, Coca-Cola has already invested in Keurig Green Mountain and Monster Beverage, which is currently the number two RTD coffee offering. But, competing with Starbucks, the real monster in the category, requires a solid coffee brand. And that, according to Holtz, is what makes Coke so happy about having Dunkin’ in its stable of non-carbonated offerings.

“This is a big bet for us, without question,” Coca-Cola’s North American VP for coffee and tea Geoff Henry said in a press release. “And we’re confident we have the right strategy in place to capture the tremendous opportunity we see ahead. The demand for coffee of all varieties cannot be overstated.” 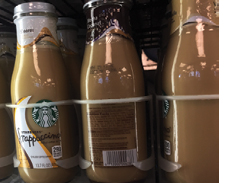 In its press release announcing the new partnership with Coke, Dunkin’ Brands said, “The agreement supports Dunkin’ Donuts’ goal of strengthening its position as a coffee authority and further extends the Dunkin’ Donuts brand into new distribution channels.”

What Dunkin’ doesn’t talk about publicly is that it tested the RTD concept before it signed on the dotted line with Coke. According to one franchisee who was briefed on the testing, after Dunkin’ Brands presented the results of its market test – which pointed to a great upside for the deal – to franchisee leaders, the franchisees decided to get a second opinion. With Dunkin’s blessing, the franchisees commissioned a separate, independent market test. The results of that test were in line with the brand’s test.

The conclusion, according to one franchisee who spoke on a condition of anonymity: “This may help us. It will not hurt us.”

Dunkin’s RTD iced coffee will enter retail channels in much the same way as Dunkin’ branded Keurig K-cups did in 2015. Bottles of iced coffee, bearing Dunkin’ labels, will roll out of Coca-Cola bottling plants and be delivered into supermarkets, convenience stores and Dunkin’ shops across the footprint. And, franchisees will share the profits with the brand, as they do with K-cups. Sources tell Independent Joe the profits will be split 50/50.

When they announced the K-cup deal, Dunkin’ called the profit share “unprecedented in our industry and underscores the collaborative franchisor/franchisee relationship we have at Dunkin’ Brands and our focus on building store-level profitability.”

K-cup sales have been solid. Dunkin’ estimates it sold more than 150 million pods last year, and predicts that it will sell 2.4 billion cups of coffee through the grocery channel this year along with 2 billion cups in its stores. In a press release timed to the release of its second quarter earnings, Dunkin’ Brands CFO Paul Carbone said, “In our first year of [K-cup] sales, we were able to get hundreds of millions of cups of Dunkin’ Donuts coffee in the hands of new and existing customers.”

When Dunkin’ decided to make its K-cups available in retail channels outside of its franchised locations, store-level sales had been slipping. Franchisees welcomed the opportunity to realize a higher revenue stream from the branded coffee pods than they were receiving from just their own shops. The situation with RTD iced coffee is not quite the same. Thanks to the success of cold brew, the iced coffee category is exploding. Some may wonder whether making Dunkin’ Donuts iced coffee available in a ready-to-go retail option will take money out of franchisees’ cash registers.

The academic publication IMPACT: International Journal of Research in Business Management defines the term cannibalization as, “the process by which a new product gains sales by diverting sales from an existing product.”

Its 2014 paper, “The Impact of Cannibalization on Consumer Purchasing,” authored by Kallepalli Madhavi, found “Cannibalizing an existing market is a successful strategy for attacking an entrenched market leader. The attacker erodes the position of the dominant company, although the attacker cannibalizes its own products in the process. The attacker hopes to compensate for its loss with increased market share in the redefined market.”

That may sound like a solid strategy for weakening Starbucks’ market dominance and expanding Dunkin’s brand awareness – especially in emerging markets where donuts are a primary sales driver – but it may also wind up hurting franchisees’ bottom lines. As one franchisee in the Southeast market who asked not to be identified said, “The cannibalization effect is definitely something to consider, especially if there is a convenience store next door to your own shop.”

It’s worth considering the scenario. If a customer walks into a c-store to get a lottery ticket or a bag of chips, he or she might also opt to grab a bottle of RTD Dunkin’ iced coffee from the cooler instead of walking next door for a cup of iced coffee. The franchisee gets a slice of the sale of the bottled Joe, but loses out on the total sale, plus the complimentary snack. It’s a piece of something versus the whole of something else.

Still, beverage editor Steve Holtz is optimistic franchisees will be winners in the deal, “I don’t think there will be a significant loss of traffic to the shops.” He envisions a scenario where franchisees get a double dip at profits from a customer who comes in for a fresh-made order of iced coffee and grabs a RTD bottle to go. The additional sale, plus the profit-share, he says, should make for a healthy revenue stream for franchisees—with no cost to invest in new equipment or additional personnel.

Ready to drink coffee will reportedly be bottled in Espresso, French Vanilla, Mocha and Original flavors. In its recent article on the Coke-Dunkin’ deal, the National Association for Convenience and Fuel Retailing asks “Is 2017 the year for ready-to-drink coffee?” Operators behind the counters at their convenience stores are eagerly expecting a sales jolt from bottled Dunkin’ iced coffee. Dunkin’ franchisees know that iced coffee sells, they just have to hope that the RTD variety doesn’t leave a bad taste in their mouth.