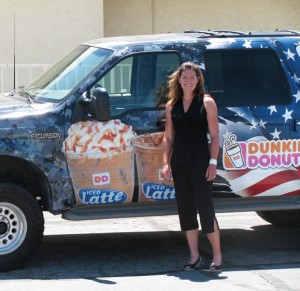 “I had to sell myself and what I could do for the brand. My biggest thing is customer service. When I had my business, I knew every customer’s drink when I saw them in line. Customer service is what I take pride in. That and speed of service; I’m known for being fast!”
Nicole Hansen

Nicole Hansen loves coffee. As a teenager, she would drink iced mocha with whipped cream, but as she matured so did her taste. “As I became older and trained my pallet, I began to discover some good blends of Arabica beans. Now I prefer an iced coffee or Café Americano with a splash of cream.”

Coffee has always appealed to Hansen—as a beverage and a commodity. One of her first jobs as a high school student in Washington state was at Shotzys, a local coffee shop in Spokane. When she moved to Seattle to attend the University of Washington, she prepared hot and iced drinks at a place called Tully’s, a Starbuck’s competitor best known around Seattle for its green, neon letter T, which has been a fixture in the city’s skyline since 2000. After graduating with a degree in Communications/Public Relations in 2005, Hansen, whose maiden name was Younker, launched her own small chain of coffee bars called Nikki Jean’s.

This fall, she will open her first Dunkin’ Donuts restaurant, in Carson City, NV (about 30 miles outside of Reno).

“Last September, we signed a store development agreement (SDA) for nine stores in the Reno market,” says Hansen, who at the time of her interview with Independent Joe was still in the design phase having chosen the Dark Roast theme for her inaugural restaurant.

While it’s easy to take a double-take at Hansen – she is 6’1” tall with thick, shoulder-length brown hair, an athlete’s build and a visible sense of self-confidence – some might think her entry into the Dunkin’ Donuts franchise owners community was a long-shot. At the time she made her pitch to Dunkin’ Brands for the rights to develop the Reno market, Hansen was just 30 years-old. She had no family connection to Dunkin’ and no experience in the system.

“I had to sell myself and what I could do for the brand,” Hansen says. “My biggest thing is customer service. When I had my business, I knew every customer’s drink when I saw them in line. Customer service is what I take pride in. That and speed of service; I’m known for being fast!”

In 2006 and 2007, Nikki Jean’s was a well-known espresso bar in and around the Tri-Cities of Washington State (Kennewick, Pasco, and Richland).

“I had a vision, an idea, I wanted to do an espresso stand,” she remembers. To get the business going, Hansen convinced a local banker to finance her dream. It didn’t matter that she was 22. As Gina Brown, her banker with Numerica Credit Union, remembers it, “I knew by her personality that Nicole is someone who gets what she wants. She came to us with a business plan and her projections and we just went from there.”

With her confidence, determination and hard work Hansen overcame her inexperience as a business owner and, Nikki Jean’s quickly grew from one espresso stand to six, providing morning shots of high-octane caffeine to the hipsters of the Pacific Northwest. A Yelp post still declares Nikki Jean’s as, “One of the best drive through coffee shops I’ve ever donated my cash to.”

Eventually, Hansen expanded the hours – and menu – turning the espresso bar into a wine bar where some of those same customers could stop by after work to wind-down from their day.

“It was a great business,” Hansen remembers. But, she wanted more. “If we do this right, we could open 15 Dunkin’ stores. I am young and I can help grow the company out west.” 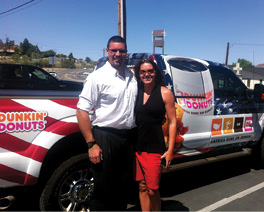 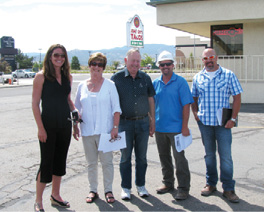 Hansen, with members of her construction and development team, at the site of her inaugural Dunkin’ shop in Carson City, NV. Right: Hansen with her husband Drew.

The challenges of establishing a Dunkin’ beachhead in western Nevada are significant. Reno was battered by the Great Recession. According to Moody’s Analytics, unemployment peaked at over 13 percent in 2010 and has stabilized at 7.1 percent today—though still above the national average. Housing values plummeted as well when the housing bubble burst. Today they are just starting to climb back. Historically, Reno’s economy rose and fell based on the gambling industry; after all, this is the place where Caesar’s Entertainment was born. But the city is working hard to diversify its economic base. A recent story in the New York Times reported Reno is now home to many new e-commerce ventures, as well as an Apple data center. The city is also vying to be the home to a new factory that will build Tesla cars.

Hansen believes Reno’s new and old workforce will run on Dunkin’. She is particularly interested in appealing to the region’s large military and veteran population. She and her husband, who served in Iraq and has signed on to help manage the business, will offer discounts to veterans and plan to take advantage of Nevada’s incentives for hiring veterans. The Hansens began advertising their new Dunkin’ Donuts restaurant with a wrapped Ford SUV featuring patriotic imagery and Dunkin’ iced coffee. They are working with the local veterans’ council and are planning job fairs in the weeks prior to their opening.

She has already been to Dunkin’ Donuts University and is working closely with a new development team Dunkin’ Brands assembled from Colorado. She can’t say enough about the support she has received from DBI—especially because, unlike many franchisees who are developing western territories, this is Hansen’s first rodeo.

“They are helping oversee everything to make sure it works in our best interest. They have recommended brokers and builders and are helping us scout potential sites for new development. They give me their opinion and we work together. I feel blessed that I have a good team working with me. They want to set you up for success.”

Now, with the first opening just weeks away, Hansen is working hard to manage not just the opening; but also her long-range plans.

“I’ve learned a lot of things during this process,” she says. “Number one is to be more patient. I keep thinking I need to roll out my business faster.”

It’s not just the caffeine that’s fueling her enthusiasm and optimism. Hansen is naturally a high-energy person who has found success at every level. She was a star on her high school basketball team who, after a knee injury ended her hoop dreams, joined the crew team at UW, where she also excelled. Her fierce sense of independence comes, she says, from growing up as an only child and losing her father when she was just 11 years-old. Her mom, Norma Jean, is now part of her Dunkin’ team and will provide support and comfort as the process wears on.

“We have taken this leap because, you never know. The Dunkin’ brand speaks for itself and we have seen how people flock to new Dunkin’ shops. There was a two-and-a-half hour wait at the drive-thru at the grand opening of a Dunkin’ in Salt Lake City,” she says.

“We’re spreading the word wherever we go around Reno, and the response we get is, ‘It’s about time.’ It seems everyone has a story or an experience about Dunkin’ they want to share.”

Since its early days as a destination for gold miners, Reno has battled a hard-luck image. Today, the region’s population is steady after a growth spurt from 2000 to 2010 and new jobs are coming. It’s the perfect time, Hansen says, to establish Dunkin’ Donuts as the go-to coffee and snack place. “Whatever happens,” she says, “We’ll have no regrets.”