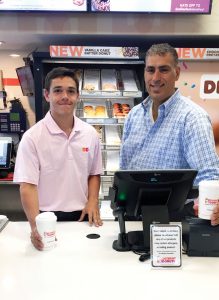 In 2001, Dunkin’ Donut’s barely dotted the landscape of Rochester, New York, with only a few stores in operation. That was the year Luis Ribeiro moved to Rochester with the goal of rejuvenating the brand’s waning presence in the area. “Some stores had closed,” Ribeiro describes of the time. “There was one drive thru in the area, which was literally a handwritten note on the menu board, telling customers to pull up to the window and ring the bell to place their order.” That bell, he recalls, was an everyday doorbell, wired to a window.

Fast forward 16 years, and Dunkin’ Donuts has a strong presence throughout the region – 34 stores, at last count, with construction in the works for two more. Drive thrus are both modern and commonplace. Customer loyalty is booming, and while Hortons is still around, it’s no longer the threat it used to be. But, Ribeiro is the first to say: The turnaround did not come easily.

Originally from Canada, Ribeiro moved to Worcester, Massachusetts after high school to attend flight school, with aspirations of becoming a commercial airline pilot. He took a job working as a night baker at a local Dunkin’ Donuts as a way to offset the tuition bill. There, he fell under the wing of franchisee John Batista, one of the earliest established Dunkin’ franchisees, who built a network in Worcester, about 40 miles west of Boston.

“Batista was like a father to me, he taught me everything,” Ribeiro recalls.

Batista remembers that Ribeiro stood out as a hard worker.

“He was a top performer, a natural choice for promotions,” says Batista.

Soon Ribeiro was moving up the ladder, and paving the way for a shift in career direction.

“When I finished flight school in 1992, the airline industry was having some trouble, so I stayed on and became a store man- ager. By the time I was around 25, I was running a few stores, and Batista encouraged me to open a store,” says Ribeiro.

He began looking for opportunities, planning to partner with Batista. Locations in Mass. proved scarce so instead, they obtained the territory of rights in Rochester, signing an eight store, five year development agreement. Ribeiro’s sister, Paula Viera, became another partner, planning to relocate from Canada to New York with her husband, Dom. Batista remained in Mass., making trips to New York as needed. 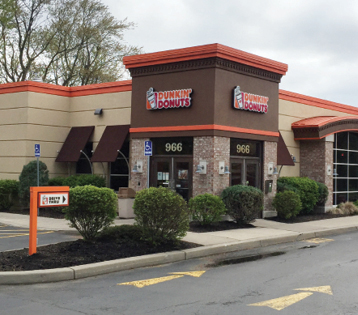 A month after opening their first store in August, the 9/11 terror attacks occurred, ushering in a sense of uncertainty and wavering consumer confidence.

“9/11 hit and shocked all of us. Those first few days there was impact [on business], but then it returned somewhat back to normal after a few weeks,” he says.

The brand’s lack of a solid legacy in the region was their biggest challenge. For a business that stakes its claim on customer convenience and satisfaction, establish- ing these two factors became Ribeiro’s long-term goal.

“The product is the product, but what helps is convenience and marketing,” says Ribeiro. “We didn’t have enough stores

at the time to really hit the convenience factor, and we didn’t have a lot of money for radio and TV marketing.”

But the team did have determination, which they poured into 70- or 80-hour work weeks, hitting a stretch of 1000+ days without a day off. Many times the co- owners questioned whether to continue their efforts.

“In Massachusetts, we would make more in one weekend than we did in a whole week in [that first] store,” Ribeiro recalls. “Most money, 70 percent, came from donut sales, and it’s tough to make money primarily on donut sales.”

So, the team turned to Batista, whose experience and reassurance kept them going.

“Failure wasn’t an option,” Batista says of those early days. “I’m a firm believer in the power of the Dunkin’ brand. If you work hard, keep persisting, and do it right, you will succeed.”

Gradually, customers began noticing the improvements the team made to operations and quality. Word spread, and profits and loyalty steadily increased.

Soon after, the number of stores grew as well.

Also key to the turnaround was recogniz- ing what wasn’t working; in this case it was three Baskin Robbins combo stores that were holding them back.

“Baskin Robbins is a good brand, but it just didn’t work in this area. Once we were allowed to close that side [of three stores], employees did much better focus- ing on one brand, and Dunkin’ sales shot up,” Batista recalls.

After three years in business, with five stores operating smoothly, things began to turn around.

“We began to see the light at the end of the tunnel,” Ribeiro says. 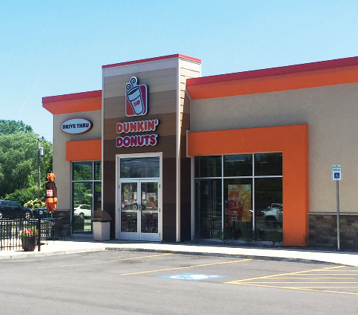 From the beginning, the franchisee team recognized the importance of hiring great employees and managers, knowing that a well-run shop and consistent product would naturally lead to customer satis- faction and loyalty. Finding those great people, however, was a challenge.

“It was difficult, at first, to find people who would reliably come in early, or do the overnight baking,” Batista says. “Once we started getting some good employees, they referred their friends and family, and that helped.”

Maintaining employee satisfaction remains an integral factor to success. The team has hired many workers who have moved into managerial positions.

“We have a lot of pride in our employee pool, we try to keep them happy and create a family atmosphere,” Ribeiro reports. “Our first hire is still with us. We hired her when she was 15, part time, and today she works in the office as a manager.”

Successful Dunkin’ franchisees know if they can offer the consumer a great guest experience, they can beat the competi- tion. In Rochester, that meant putting the customer first in a way the brand hadn’t before.

“A lot of time and money went into improving the brand’s perception,” Batista recalls. “Cleanliness, maintenance was always important; nothing was put off, the stores were always kept clean and looking good.”

They also looked for ways to stand apart from the competition, an effort which earned Ribeiro Dunkin’ Donuts’ Innovator of the Year award for new store design in 2005. He still recalls the experience of receiving the award at the brand convention in Las Vegas.

“We had a store near Starbucks, and I wanted to make it a little upscale, so I got approval to introduce some features, like marble and granite,” Ribeiro explains. According to Batista, those special touches made a big difference with local customers. “The focus on creating a welcoming, upscale environment helped to turn the brand around in the area.”

“As much as you know about properties, there are always surprises. A store you think will do really well won’t, and a store you expect to do poorly does well,” he says.

Today, Ribeiro and his team are proud to say that customers who visit Dunkin’ Donuts restaurants throughout Rochester can count on a quality experience, If a scan of online reviews is any indication, he’s right. One visitor wrote on Trip Advisor, “Wonderful staff! The venue is clean and the latte is great! They are attentive and the bathrooms are clean!”

Such reviews reinforce what Ribeiro and his partners already know: They have rebuilt the relationship with their customers and now those customers demonstrate their loyalty through their repeat visits. The business is well established and ready for the next generation of Ribeiros and Vieras.

Ribeiro’s nephew Jonathan – has been involved with the stores from a young age and is now studying business at St. John Fisher College.

As far as continuing to add new stores, they plan to tread lightly going forward.

“It becomes a slippery slope from here,” Ribeiro says. “We don’t want to cannibal- ize sales from any of our existing stores to open a new store.”

But he’s up for new opportunities. “Maybe that means taking the experience and knowledge from this and duplicating it in another market, who knows?”