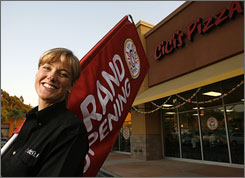 Melissa Carter, a former lawyer who decided to go into the pizza business, stands in front of her store in San Diego. She and her husband Andre recently opened the first CiCi's all-you-can-eat pizza buffet in California.

Laura Petrecca, writes in USA TODAY that inside a freshly renovated building, 27 restaurant trainees scurry around sweeping, shaping dough and cutting 12-inch practice pizza crusts into eight slightly misshapen slices.
“Keep your elbow up” and “Turn your wrist ⅛-inch at the end” are among the slicing tips practicing pizza cutters hear from scrutinizing store managers.

It’s 9 a.m. on a Friday in August. The recession that started in December 2007 plods along as businesses continually fold, jobless claims tick up and millions of families desperately try to make mortgage payments and curtail spending.

Yet in this eastern San Diego strip mall, hopes abound.

Here, in three days, the first CiCi’s Pizza buffet in California will open. The chain is known for cheap prices, peppy workers and a variety of pizza toppings.

For CiCi’s Enterprises and its nearly 650 other restaurants in 32 states, this is an entree into a potentially lucrative market at a time when many of CiCi’s expansion plans had to be scuttled because of the economic crisis.

When the restaurant opened to a long line of CiCi’s lovers on Aug. 10, the Carters’ venture became one of nearly 30 million U.S. small businesses.

In this recession, starting a business from scratch or buying a franchise has been the way out for many. Of job seekers who gained employment in the second quarter of 2009, nearly one in 10 — 8.7% — did so by launching their own businesses, according to outplacement firm Challenger Gray & Christmas’ quarterly Job Market Index. That start-up pace is up from 6.4% in the first quarter and is twice the rate reported in Challenger’s 2008 second-quarter update.

The business owners nearly all believe they have enough energy and ambition to succeed — but statistics for success aren’t on their side. Even in non-recessionary periods, about half will fail in their first five years, according to the Small Business Administration’s Office of Advocacy.

From laid off to start-up

Many have become entrepreneurs by force. With 6.9 million jobs lost since December 2007, and work difficult to find, laid-off employees have created consulting firms, launched eBay businesses and signed on with direct-sales firms such as Avon to earn money.

“These are people that two years ago did not aspire to own a business, but circumstances have dictated that they look at freelance opportunities” and other business ventures, says Ken Yancey, CEO of non-profit entrepreneur mentoring group Score.