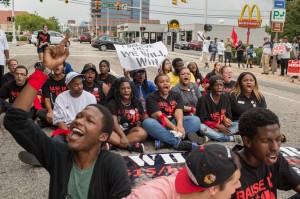 Photo by Justin Cook for MSNBC

As you all know too well, last week was the latest SEIU and affiliate-planned worker protests seeking a mandated $15/hour minimum wage and the first undertaking on the foundation of civil disobedience.  In the aggregate, dozens of protesters and SEIU agitators were arrested in a number of cities across the country.  What you might have missed however, was the fact that one of those arrested in the protests was a sitting United States Representative.  Representative Gwen Moore (D-Wisconsin) showed how beholden she apparently is to the SEIU and their pet causes when she participated in the protests in West Milwaukee and was arrested for disorderly conduct and civil disobedience as a result.  Her stunt has been called “political grandstanding” in some circles.  It seems relevant to point out that Representative Moore has been the beneficiary of SEIU political largesse to the tune of $50,000 over the eight years since she was elected “by the people”