In the months before anyone was talking about coronavirus, the outlook at Jack in the Box was bleak. Since 2015, sales had been on a mostly flat trajectory, powered by low price meal deals. Increases in sales were modest and typically not enough to offset the rising cost of labor and goods. For the franchisees, the chain’s practice of driving sales through discounting did not represent a sustainable profit model. Backed by their strong franchisee association, Jack in the Box (JIB) operators voted no confidence in Lenny Comma, the company’s chief executive, calling for his ouster. Fast forward to the COVID-19 pandemic days, JIB is bullish about its trajectory. Its resurgence proves that brands nimble enough to adapt to their customers’ changing habits – with strong franchisees behind them – can be rewarded.

When America’s national emergency forced restaurants to close their dining rooms, revenue began tumbling across the industry. But as people adapted to sheltering in place orders and drive-thrus were able to operate safely, QSRs started bouncing back. Jack in the Box, which had just started gaining traction with a new tiny tacos offering, kept nearly all of its locations open during the pandemic—even starting a popular social media campaign called, #StayInTheBox with meal deals and free delivery. In May, JIB reported same store sales rose more than eight percent, as consumers readjusted and made larger orders. JIB typically earns the balance of its revenue through its drive-thrus. Historically, dine-in customers account for approximately 15 percent of revenue. The rules of the pandemic worked in JIB’s favor.

The chain’s better-than-expected sales boost was welcome news for Comma, the embattled CEO who had been at war with his franchisees for some time. A new boss, Darin Harris, took over in June. Harris is a QSR veteran, having served as CEO of CiCi’s Pizza and as a senior vice president at Arby’s. He was also a franchisee of Papa John’s and Qdoba. Harris had a brief major league baseball career after going to the 1991 college world series as a member of the Creighton University Blue Jays. As he takes over JIB, franchisees are hoping new leadership will result in better alignment between the brand and its operators. 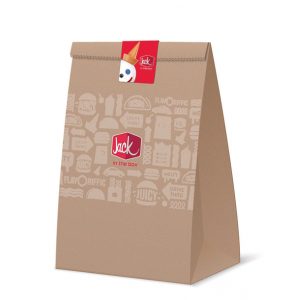 As attorney Robert Zarco, who represents the National Jack in the Box Franchisee Association (NFA), told us, “No company that is as heavily franchised as Jack in the Box can successfully move forward and implement a long-term strategy without alignment with its franchise community. World class brands utilize a shared vision between franchisor and franchisee, with an alignment between the two being the most critical.”

The two sides came together three decades ago when a major food scare severely tarnished the Jack in the Box brand. After an outbreak of e-coli led to the deaths of four children who ate tainted hamburgers, franchisees banded together to form the NFA, with the goal of creating a unified voice that could sit at the table with the brand when it makes decisions that affect franchise owners. But, under Comma’s leadership, franchisees felt the company wasn’t listening to their concerns. Prior to the pandemic, NFA Executive Director Tabitha Burke, told us, “The franchisees want a change in the direction of the company; they’re looking for innovation and want Jack in the Box to lead in the game again.”

The franchisee association stayed strong and unified throughout the challenging years with Comma at the company helm. But they were also undeterred in their push for new leadership and a new direction. When business started slipping again in 2016, critics pointed to JIB’s poor product development. Restaurant Business Magazine reported franchisees were complaining the brand was requiring them to do “unnecessary” remodels, in part to shift some maintenance costs toward the franchisees. The persistence of the franchisee association began to pay real dividends last year when JIB announced it would be investing in revitalizing its drive-thrus, explaining that customers cared more about digital menu boards and other drive-thru enhancements than restaurant remodels. “I don’t think the consumer is valuating all new furniture and wall treatments and lighting as much as they’re going to value enhancements to the drive thru,” Comma said during the company’s May 2, 2019 earnings statement, in what sounded like recognition of franchisees’ frustrations.

Once the coronavirus hit, franchisees – who operate the vast majority of JIB’s 2,250 restaurants – focused their efforts on weathering the storm. Burke says the association was there to help. “We are adjusting the business model to accommodate the customers,” identifying the question on the forefront of every operator’s mind: “How do we still give great service, product and savings?”

The answer became clear by the time the nation was adjusting to the realities of living amid a constant health crisis, Jack in the Box was well poised to handle a rush of drive-thru business, especially at off hours. Customers flocked to drive-thrus not just for convenience, but also because they were viewed as a safer, no-contact ordering and pick-up method. JIB worked on streamlining its systems to reduce wait-times. As the franchisee association had long advocated, the brand heavily promoted its mobile app, which was used more than ever before during the early days of the crisis. By May, active users doubled from the start of the pandemic. JIB’s partnerships with major food delivery services also paid off. Over 95 percent of JIB restaurants are covered by at least one of the four major delivery providers – DoorDash, Postmates, Grubhub, and Uber Eats – and delivery sales more than doubled in the last quarter.

JIB also benefitted from other shifts in consumer behavior. With fewer people braving a morning commute, JIB’s all-day breakfast offerings proved popular. Many people working from home and adjusting to new routines, found a mid-morning breakfast burrito and coffee appealing. Breakfast had been a bright spot in an otherwise stagnant sales story for JIB before the pandemic. The breakfast menu boasts Jack’s new Boosted Coffees, which the company claims is “stronger than two cups of coffee,” as well as croissant sandwiches, mini pancakes and hash browns.

“Even though COVID-19 has shifted everyday life for most consumers, we are still seeing our customers enjoy breakfast throughout the day as they did before,” Jen Kennedy, JIB senior vice president, told Forbes Magazine.

In recognition of the challenges that JIB franchisees faced as articulated by the franchisee association and with the constant encouragement of the association, Jack in the Box stepped up to provide relief for franchisees feeling financial pressure from a nosediving economy. JIB reduced its marketing fees, delayed collecting rent payments and pushed out remodel and development requirements for at least six months. Early on, the brand’s supply chain secured masks, gloves and sanitizer so restaurants could operate safely. Burke says the franchisee association also worked with its partners to recruit and onboard employees. “We are fortunate in that we didn’t have to lay off a lot of employees; sales turned in enough time to keep them.”

As dining rooms reopen, operators will, in Comma’s words, “slow walk” the process. “I would describe our outlook going forward as cautiously optimistic, and we will continue with an approach that will be careful and conservative,” he said.

As he settles in to the CEO job, Harris will have to prove he can build a relationship with his franchisees that is based on trust and transparency. Burke says one of the points in his favor is his experience as a franchise owner. “We feel he fits the bill to rebuild relationships with us and rebuild the culture in the company.”

“My first order of business will be to learn this iconic brand and listen to our team members, partners, and franchisees on how best to serve our guests,” Harris said in an April statement announcing his hiring.

Jack in the Box moves into its next phase having strengthened its market position during the pandemic. Franchisees proved resilient and innovative, emboldened by their efforts to bring a new chief executive to the company’s San Diego headquarters. From the office of the CEO on down, there is clear recognition that the NFA is a force to be reckoned with. If Harris, who will have the spotlight when Jack in the Box celebrates its 70th birthday next February, repeats the mistakes his predecessor made, franchisees will let him know—and that could dent his platinum anniversary. In the meantime, the chain’s iconic spokesman, Jack, remains as cheeky as ever, especially when pushing its morning menu. “Do your morning stretches, then eat a bacon ultimate cheeseburger.”