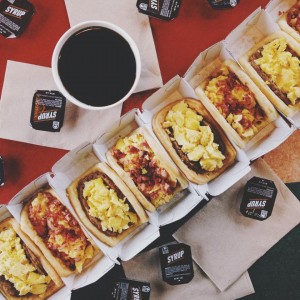 With their merger receiving all the requisite approvals, BK Worldwide and Tim Horton’s took the final step in becoming one last week when their respective common stocks ceased trading on the Toronto and New York Stock Exchanges.  Shares of the newly merged company, Restaurant Brands International, now the third largest QSR company in the world, began trading on both exchanges this week.  In the wake of a successful entry into the breakfast segment, Taco Bell this week announced that it will expand its existing breakfast menu in the new year and also launch a catering platform in 2015 as well.  Lastly, we note that as Peets Coffee and Tea announced a shift in its focus to more of what the company called their “growth markets”, it also acknowledged that it was closing a store in downtown Baltimore along with others in Pennsylvania, Michigan and Ohio!