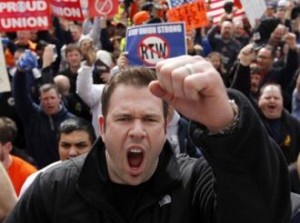 In neighboring Indiana, the state Supreme Court has unanimously upheld the state right to work law, dealing a blow to organized labor, which had strongly opposed the law when it was passed in 2012.  Generally, Right to Work laws prohibit an employer from requiring union membership or requiring the payment of any monies (including union dues) as a condition of employment.  The challenge was brought by a number of plaintiffs including Local 150 of the International Union of Operating Engineers (IUOE).