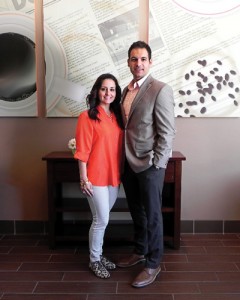 “Joe Batista was the owner and he saw something in my Dad. He appreciated his hard work and dedication and offered him a partnership in the business,” says Larry. Antonio accepted, and the Lemos family went on to build stores with the Batista family. When Larry was four years old, the Lemos family moved to Connecticut to operate one of the stores on New Park Avenue in West Hartford. “My whole life I saw my parents sacrifice. I’d hear them coming down the stairs at 2 a.m. to go to work; my mom would make coffee and my dad would bake. Then they’d come home exhausted yet still able to take care of our family,” Larry remembers. From a young age Larry wanted to go to work with his parents. “I saw their passion for what they did. They taught me that if you want something, you have to go after it, work hard, keep moving forward in everything you do.” Larry Lemos’ story is familiar to that of many second generation Dunkin’ Donuts franchisees. Recognizing that hard work can pay off, the younger Lemos followed their lead. His parents bought out the partnership from the Batista family, and throughout the years subleased the properties to other franchisees. Over time, Larry operated the business and at the age of 22 became a franchisee. “When my parents were ready to retire, I bought into the business and continued to grow the business,” Larry says. In the early days of Dunkin’ Donuts operators like Antonio and Maria focused on baking donuts and working the counter. But, as second generation operators like Larry started taking over, they looked at new opportunities to take a Dunkin’ Donuts restaurant and use it as part of a larger commercial development. In Larry Lemos’ case, that shop on New Park Avenue in West Hartford afforded the opportunity to buy the property next door and build a strip center with a 3,000 square foot Dunkin’ Donuts that included a drive-thru. Newly married, Larry and his wife Sonia created Lemos Properties and learned what it takes to design a building, lease the space and manage the property. That was in 2002. “I figured if we’re going to get a loan from the bank and make this happen, we should get some residual income,” he explains. Larry leased space to a Subway franchise and a Verizon Wireless store in the strip center. 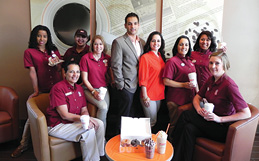 as such a great start. My parents retired before they hit 50, our sales skyrocketed and the Dunkin’ Donuts alone was making enough money to pay its debt on the property.”

Back in Canton, Dunkin’ Brands took note of Lemos’ success. The family earned recognition from the brand for their innovative development – creating a new Dunkin’ Donuts with a colonial style to match the look and feel of their Connecticut town – and for the sales increases they recognized that first year. “I always wanted to give back to the Dunkin’ community, so a proud moment was when I received an innovation award for giving the brand a few design ideas,” Larry says. Larry and Sonia spent several more years in the West Hartford market, opening up another Dunkin’ Donuts just two blocks from their New Park Avenue store. “We did well in Connecticut,” he says, but like so many franchisees eager to grow their business, Larry realized he needed to look beyond his native territory.

Before retiring, Antonio Lemos purchased an existing Dunkin’ Donuts shop in Melbourne, Florida with his son, Timmy. “In 2005, I flew down to help Timmy remodel the store and helped him decrease the remodel timeline from a month to two weeks,” says Larry. “The construction manager from Dunkin’ was impressed with how quickly we turned it around and he asked if I was interested in building more stores in Florida.” Larry and Sonia jumped at the opportunity and signed a development agreement in Orlando. For nearly two years, Larry flew back and forth between Connecticut and Florida getting up and running in a new territory while still managing the existing business. In late 2006, he and Sonia decided they would make the move permanent. They sold their existing franchises – maintaining ownership of the real estate – packed up their two kids, and moved to Orlando. At the time, Florida’s economy was still feeling the effects of the Great Recession. “During the first few years it was challenging because the product mix is different in Florida. For instance, you don’t sell as much beverages, which are more profitable in New England,” he says. “At first, it was difficult. I was down because I wasn’t getting a return on my investment. Sonia really encouraged me to dig deep and move forward.” Sonia and Larry first met as children at a soccer game. Years later, she came into one of the family’s Dunkin’ shops and they began talking. That led to a love affair which has blossomed into a 15 year marriage and successful business venture. Larry is in the process of building 10 new shops in the Orlando market. 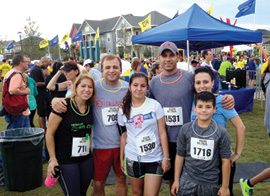 While controlling costs can be a significant challenge for any franchise owner, Larry says one secret to success is to build and nurture strong relationships with your employees. “You have to believe in your employees. Have a detailed interview process, ask if they are happy working for you, and listen to them. I feed off their ideas and implement new policies and procedures to ensure a consistent network with great manager incentives. If there are things that need improvement, we implement change, add new systems where needed.” Lemos also relies on his faith to guide him. The family is active in their church, and every year they embark on a missionary trip to the island of Eleuthera in the Bahamas, where they help build a camp for struggling youth. In the course of his interview with Independent Joe, Lemos cited this biblical passage from Proverbs 11:14, “Without the guidance of good leaders a nation falls. But many good advisers can save it.” The message resonates for this family-run business; Lemos feels strongly that as a leader he must take interest in his employees’ well-being. “Remind them that their family comes first and that work should never get in the way.” He encourages his managers to go home early one day a week. “I believe that when your restaurant managers manage their family well, they’ll definitely manage your business well.” The strategy’s worked; Lemos hasn’t lost a store manager since 2007. Having invested in his employees and managers, Lemos says other investments need to ensure his Dunkin’ Donuts restaurants have excellent curb appeal and merchandising. “You don’t have to advertise donuts since it’s in our name, so put your advertising efforts elsewhere. Every three years, I put money back into my stores, whether it’s painting the interior, adding TVs, or painting the exterior trim. Usually, by the time the five-year refurbishment is up, I don’t always have to make those improvements at one time,” he says. “If you don’t do this, consumers will start comparing you to the competition and here in Orlando we have fierce competition with McDonald’s having double the locations that we do,” as well as convenient stores offering a wide variety of food and drinks. 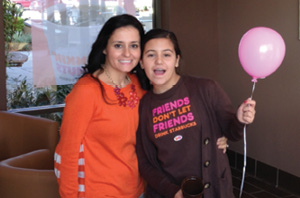 Franchisor decisions can add stress too. “As if competition isn’t enough to worry about, sometimes the biggest stress can come from Dunkin’ Brands. Like the fact that they no longer offer territory protection rights to their franchisees, advertising it as open space—a free for all. At times, I wonder about those smaller operators that have less than 10 stores and want to grow,” notes Larry. “We need to grow smart, as these are family owned businesses and the Dunkin’ system was grown on family owned business. When I see them losing their vision a little, it can get discouraging.”

It’s one reason why Larry supports DDIFO. “I believe if we have one voice to stand up for the franchisee, it can only help us. And I see that DDIFO is trying to reach out to franchisees in the Florida area, as well as others around the country, which is hopeful,” he says.

Lemo’s daughter has created artwork to help raise money for the Foundation.

A means to give back

While the Lemos family has worked hard for their success, they pay it forward sponsoring local youth teams, donating to community events and volunteering with their church. “The last couple of years have been exciting,” and busy. Lemos serves on the Advertising Committee and the southeast Regional Advisory Council. In 2012, he was awarded the Southeast Franchise Operator of the Year Award and, the next year, was nominated for Franchisee of the Year. “I think a lot of these honors have to do with helping franchisees out with local vendors that I use, as well as the community involvement we do through the Dunkin’ Donuts-Baskin Robbins Community Foundation,” says Larry. For the past two years, Larry and Sonia co-hosted a charity event for the Southeast chapter, which raised over $50,000 for local children in need, and they make giving back a family affair. “My daughter is very artistic and she came up with an idea to display her Dunkin’ inspired artwork in our individual stores. She was asked to make paintings to donate to the foundation, which ended up raising money. Due to that success, she donated more paintings at a DDBR foundation dinner and a golf tournament, which generated over $7,000 for the foundation,” adds Larry. “It’s important that our kids embrace the opportunity to give back to our communities.” Larry says his kids might eventually have more to do with the business. “Who knows, maybe our children will carry on the tradition. Our daughter says she wants to be an architect and our son says he wants to be a business owner,” he says. “Maybe their passions will lead to a third generation of Lemos franchisees running Dunkin’ Donuts.”