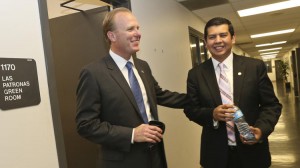 This past week, San Diego joined the chorus of local communities caving in to establish local minimum wages, mandating that employers within the city pay workers a minimum of $11.50/hour by January 2017.  San Diego’s first term Republican Mayor Kevin Faulconer, has indicated that he will veto the ordinance, after which, the democratically controlled council will have 30 days to consider overriding his veto.  The proposal, which also contained a provision mandating paid sick leave for all employees, calls for the city’s hourly wage to rise to $9.25 in January, 2015, then $10.50 the following year and $11.50 in 2017.  Thereafter, the minimum wage would be indexed to inflation, a cowardly approach taken by many politicians recently that allows them to avoid making tough decisions on wage mandates in future years.