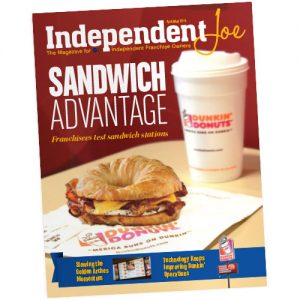 No longer just a ho-hum combination of white bread and filling, today’s sandwich has evolved into a creative and versatile snack or portable meal, and a gastrointestinal necessity for Americans on the go. For Dunkin’ Donuts franchisees, this translates into big opportunity and a big challenge. How do you add new and more complicated sandwich choices, while also accommodating “have it your way” beverages without making customers wait any longer than they have to? Dunkin’ Brands believes a newly redesigned, modular sandwich station will expedite the production of sandwiches and other hand-held items, like wraps or burritos.

Stephen England, vice president of Operating Systems at Dunkin’ Brands, says that Dunkin’ has always been committed to offering all-day-breakfast and an all-day menu, before the increased popularity of sandwich items. The new stations are one more way to support that commitment.

“Our goal was always to have a ‘future-proof’ solution that enables our guests to receive our full menu of products quickly and whenever they want, day or night, without the need to change the sandwich station equipment as consumer preferences change,” England says.

The sandwich business has been steadily growing, providing reliable revenue – and some operational headaches – for franchisees. As Dunkin’ Brands worked to develop its new sandwich station, the company sought input from franchisees as well as their employees and managers.

Prototypes have enabled franchisees to take an active role in developing the sandwich station’s design. In February 2014, Canton, Massachusetts franchisee Michael Cavallo became the second franchise owner – and the first one in Dunkin’ Brands’ home state – to install a new sandwich station prototype. 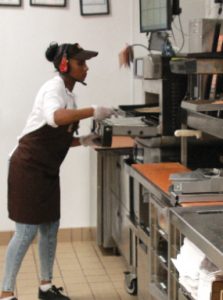 Cavallo says his store’s existing plans for renovation, along with their larger design, were important factors in serving as a test site for the prototype. Able to accommodate a large station, information from his store was used to analyze ways to create scaled-down versions to accommodate different settings. Cavallo says he and his workers have been pleased with the benefits they’ve gained.

“We can house up to four workers at a time, with a large freezer on one end, and two VDUs (visual display units) making it easier for workers to see orders,” Cavallo explains. Information from his store has played a crucial part in developing solutions to accommodate smaller locations.

“Sandwiches, bagels and wraps are good business, but they are more time consuming to prepare,” Cavallo says, adding that “The goal was to look at the different elements of the sandwich station, and adapt scaled versions to suit the different types of space available.”

Shaving off valuable time comes from having steps for each process and reducing the number of motions the employee takes, says Cavallo, and the new stations have demonstrated gains in both areas.

The sandwich stations are uniquely adaptive due to their scalable, modular design, giving franchisees the flexibility to implement the best solution to suit their store size, staffing and customer demand.

According to England, “With an estate in excess of 8,500 stores, we clearly have many different footprints. We’ve developed stations that will fit in all of our locations, while attaining the maximum capacity levels.”

Some of the popular components include: a dual belt toaster, which accommodates different requirements; larger holding areas for cooked foods; more refrigerator units; and a double-sided work configuration, enabling prep to occur on both sides of the aisle.

In addition to those key features, Dunkin’ has examined best practices from across the board to make sure all key components were included, to maximize efficiency, and to determine ideal space and product access.

“For example, the stations were designed to be easier to clean and keep clean, with things like crumb-catchers and built in trash areas,” says England. “We (also) enhanced refrigeration units to allow for a more open worktop area, and increased refrigerated capacity to ensure stations can stay fully stocked through peak periods.”

The modular design also minimizes upheavals when it’s time to upgrade; as demand changes, modules can be added to stations without replacing existing equipment. 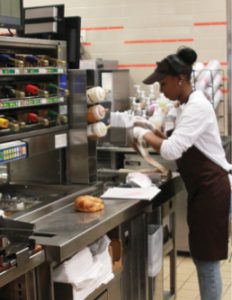 Focus on the employee

Getting the product to the customer quickly is an important focus, but another factor emphasized is employee safety. Eliminating bottlenecks in the production process plays a key role; by placing equipment where it is needed and minimizing motions and footsteps, potential collisions are reduced. As an example, refrigeration units can be placed on either end of a station, each containing the products specific to the nearest worker, rather than funneling multiple workers to one central refrigerator.

Employee comfort was another consideration. “We concentrated on ensuring the ergonomics were suitable for employees of differing heights, in order to make the station as user-friendly as possible. Equipment was placed in easily accessible areas,” says England.

Cavallo feels the more efficient stations help employees adapt to new products and LTOs. One example is with the burrito, a popular item on their menu. With efficient steps in place and a carefully designed setup, the station offers the framework to move more units through and quickly serve the customer.

“It takes a while for a worker to get used to a new process. There’s always a learning curve, and then you try to make it a little bit more efficient,” he says. “Every part of making the sandwich is a step which takes time, and we want to be done within two minutes. The sandwich station is a critical part of getting it done in time. The smallest improvement – whether it’s in labor or time – is a win.”

The need for quickly prepared, portable, nutritious food remains strong, sending other restaurants and convenience stores scrambling to join the action. The streamlined and efficient sandwich station can only build upon Dunkin’s solid reputation and success as an all-day, go-to destination.

“The sandwich competition is fierce,” Cavallo agrees. “But we’ve been doing this for 25 years, we do one thing and do it well.”