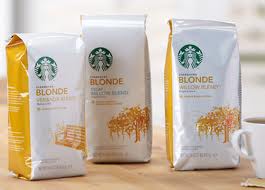 Robert Lillegard reports at QSR that after 40 years of staking its reputation on dark and medium coffee roasts, Starbucks began offering a light roast on January 10.

The Seattle-based coffee giant launched its new Blonde roast across the country in what some believe is a response to the growth of coffee competitors like McDonald’s and Dunkin’ Donuts.

In an e-mail to QSR, Starbucks spokeswoman Alisa Martinez said the company launched the lighter roast as a response to market demand. The company’s research showed that while plenty of customers liked the taste of Starbucks’ darker blends, 54 million American coffee drinkers would rather drink something milder.

“We realized there was a huge segment of the market we were missing,” Martinez said. “Nearly 40 percent of U.S. coffee drinkers prefer a lighter roast.”

Martinez said the Blonde, which is available in the Veranda Blend (notes of cocoa and lightly toasted nuts), the Willow Blend (bright, crisp flavor), and Decaf Willow Blend, also gives existing customers a new reason to go to Starbucks.

John Gordon, principal and founder of the Pacific Management Consulting Group, says the Blonde could draw customers from other chains.

“I think it is a shot at McDonald’s,” Gordon says. “It’s somewhat of a shot at Dunkin’. I think this is a deliberate strategy to reach out to that entire flavor profile segment.”