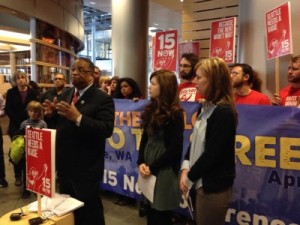 A group calling itself 15 Now is making plans to put the question of a $15/hour minimum wage on the ballot in the City of Seattle if it is not enacted by the Seattle City Council where it is currently pending.  The Council and Mayor Ed Murray’s Income Inequality Advisory Committee are in the process of holding a number of hearings on the idea and submitting formal recommendations on a citywide minimum wage.  Notwithstanding those hearings and deliberations, 15 Now activists formally filed a Charter Amendment with the Seattle City Clerk on Wednesday.  The amendment requires approximately 30,000 signatures in order to proceed to the ballot.  The proposed Charter Amendment differentiates between “big business”, defined as having 250 or more employees, and small or medium businesses, having fewer than 250 FTEs.  Were the proposal to be implemented, so-called big business would be subjected to the $15 minimum effective January 1, 2015 while small and medium business would be required to phase in the increase over three years beginning in January with $11/hour.  Future minimum wage increases would be indexed to inflation.  Currently, the minimum wage in the state of Washington is $9.32/hour.  Perhaps as a result of this push in Seattle, Starbucks Corporation CEO Howard Schultz told Charlie Rose on Bloomberg TV this week that he supports an increase in the minimum wage nationally, but says that the $15/hour figure is “not the right number” and could have “unintended consequences”.