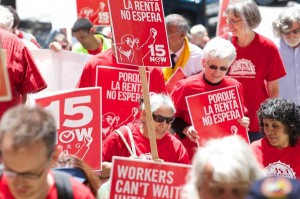 Seattle’s adoption of a $15/hour minimum wage has generated plenty of news buzz and reaction from a host of areas.  As we reported last week, the International Franchise Association (IFA) filed a lawsuit challenging the constitutionality of the law under both state and federal constitutions for violating a slew of constitutional provisions.  Media coverage of the challenge has been widespread (Fox News, Your World with Neil Cavuto, among others) around the nation.  In addition, other efforts are underway to overturn it.  One group of concerned businesses, organized as Forward Seattle, has begun the process of putting the question before the voters as a referendum on the Seattle ballot this fall.  The group had earlier tried to place a City Charter amendment on the ballot which would have prohibited adoption of the law, but amendments to the Seattle City Charter are only allowed in odd-numbered years.  Lawsuits and referendum notwithstanding, proposals from other cities around the country to establish some version of a $15/hour minimum within their own municipal boundaries began popping up almost immediately.  And, therein lies the biggest danger of allowing any legislation that is detrimental to franchisee interests to stand unchallenged.