There’s no apostrophe in “Caesars Palace.” And the lack of punctuation speaks volumes about the world-class resort in Las Vegas which will host this year’s DDIFO National Conference on Sept. 21 and 22.

Jay Sarno, the American entrepreneur who was the brains behind Caesars, believed that everyone should be emperor of Caesars for the day – not just one person. That kind of thinking typifies the resort that’s officially named Caesars Palace Las Vegas Hotel & Casino. It also exemplifies Caesars’ iconic status as a tribute to excess and luxury.

“In three words, we have the role of Caesars Palace and the goal of modern Las Vegas: To make you say, ‘Oh my God,’” says Michael Green, a professor of history at University of Nevada, Las Vegas (UNLV), and a local columnist, blogger, commentator as well as a researcher for the Mob Museum.

What to say about Caesars? The accolades are endless. The glitzy, over-the-top Strip classic, located on the west side between the Bellagio and the Mirage, is truly a palace. The Roman-themed casino hotel has an illustrious past of mobsters and motorcycle stunts; glamour and gaming; boxing and beauty. There is non-stop entertainment, including a coliseum-inspired performance venue with top headliners like Celine Dion, to lovely pools, world-class shopping, and luxurious accommodations. Caesars needs its own zip code, because, as the saying goes, “All roads lead to Caesars Palace.” The iconic empire is an 85-acre destination resort, with 3,960 well-appointed rooms and suites that set the stage for an unmatched experience of opulence combined with impeccable service and every contemporary luxury imaginable.

Green, who has written the centennial history of Las Vegas and taught a class on the history of the region, likes to tell this story to explain Las Vegas and Caesars in a nutshell. He describes hosting two friends, one a historian from a small town and the other an urban-based classicist and philosophy professor.

“I took them to Caesars and showed them the talking, moving statuary in The Forum Shops that were then the talk of the town. They say the same three words: ‘Oh my God.’ My small-town friend says it with complete wonder and my classicist friend [says it] with complete disgust.” But one thing is for sure, says Green. Caesars and Las Vegas are never boring.

If you could point at any one man and say, “He changed Las Vegas,” it would be Jay Sarno. A World War II veteran, Sarno got his start in the hotel business developing the famed Atlanta Cabana Motel, then went on to design and build Caesars Palace as well as Circus Circus. Sarno was the first to envision theme-based casinos and is widely credited for creating the modern Las Vegas.

“He was a man way before his time, and bigger than life,” says David G. Schwartz, director of the Center for Gaming Research at UNLV and author of the book, Grandissimo, The First Emperor of Las Vegas. Schwartz calls Sarno the patron saint of Las Vegas, and says that even more than 25 years after his death, the city is still built in his image. “Before anyone else, Sarno knew that Las Vegas should be about one thing: action,” says Schwartz. “Sarno built a casino, Caesars Palace, around the idea that not only was it okay to indulge yourself, but that you should celebrate doing it. Gambling, eating, enjoying pleasure more than you should, this was action as delivered by Jay Sarno.”

Schwartz spent six years researching his book, raising funds on Kickstarter to support his endeavor. He describes when the visionary Jay Sarno first showed up in Las Vegas; it was 1962 and it was still a frontier town, even though it was 16 years since Bugsy Siegel opened the famed Flamingo Hotel on the fledgling Vegas Strip. Historians can draw many parallels between the Flamingo and Caesars: the European style, the luxury and the backing of organized crime.

Sarno got a $10 million dollar loan from his friend Jimmy Hoffa, president of the Teamsters Union and a reputed mobster, to begin plans for a European-style hotel in the middle of the American desert. Many believed the project would be a failure. As Schwartz points out, “It was the most expensive casino ever built, anywhere, costing about four times more than earlier casinos like the Sands or Dunes.”

But, Sarno persevered, constructing the original 14-story building as the centerpiece of a tribute to the Roman Empire. From Cleopatra's Barge to a restaurant called the Noshorium, everything about Caesars evoked ancient Rome. When it opened on August 5, 1966, it quickly became the most successful casino in the world, says Schwartz.

“Sarno knew what made Las Vegas tick: expensive thrills and cheap luxury. Guests would walk into his place as ordinary schlepps and, amid scaled-down replicas of Michelangelo's David and the Nike of Samothrace, become emperors for a few days. It was a crazy idea, to indulge the tourists' egos like that; it might have been the greatest idea anyone ever had in Las Vegas,” Schwartz says.

For its interior, Sarno had the Caesars casino built in a series of ovals because he believed they made for a more restful, pleasant atmosphere; for the exterior, Sarno built a statue of the Roman Goddess of Love to greet its visitors.

“Whether it was the way the craps tables were laid out in the oval casino or the thrill of being served by wine goddesses who peeled grapes for and massaged the temples of male guests, visitors realized that Caesars Palace gave them something they wanted that they’d never known they were missing,” wrote Schwartz in his book.

Throughout the years, Caesars had its notable moments – it was where stunt motorcyclist Evel Knievel attempted to jump the resort’s famed 18 fountains. The daredevil failed to complete the jump, but it launched him to fame and fortune while also bringing international attention to Caesars, the kind even the best advertising agency would have trouble matching. It became a premier sports venue, hosting major boxing matches and pro-celebrity tennis tournaments. Over the years, major headliners have taken the stage at Caesars Palace, including Celine Dion, Elton John, Cher, Bette Midler, Rod Stewart, Mariah Carey, and numerous others. According to Professor Green, the opening of the Forum Shops in the early 1990s and the arrival of Wolfgang Puck’s restaurant Spago triggered changes in the offerings of the Strip, making eating and shopping into major attractions and pastimes.

Things are good in Las Vegas today. Tourism numbers for May 2015 were the highest ever and Nevada Governor Brian Sandoval recently convened a committee to focus on growth for Vegas’ future. Whatever the future holds for this self-professed “Entertainment Capital of the World.” Dunkin’ Donuts franchise owners planning to gather here in September will be treated to luxurious surroundings, fine entertainment and top-shelf service—just the way Jay Sarno said it should be. 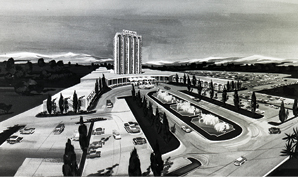 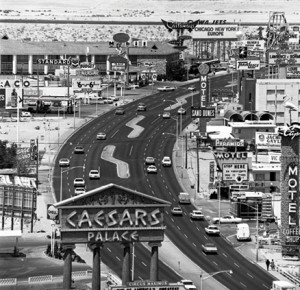 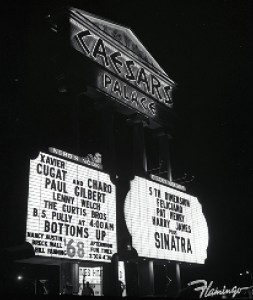 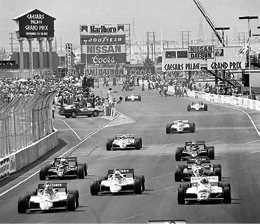 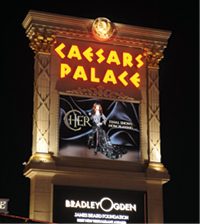 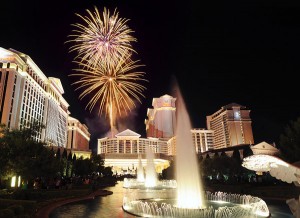 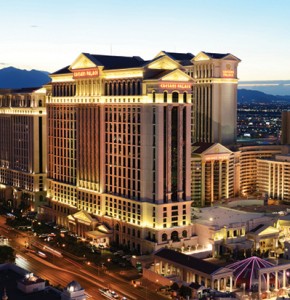 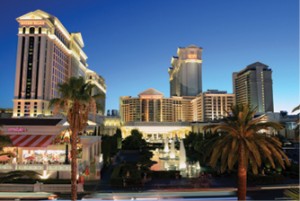