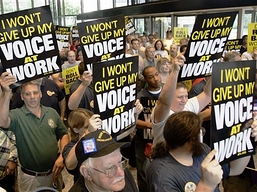 Small-business groups are lining up to oppose new federal legislation that would make it easier for workers to unionize by simply signing a card, rather than voting by secret ballot. Currently, the bill doesn’t exempt any small businesses. But many are hopeful — after compromise negotiations in Congress — that it eventually will.

Karen Kerrigan, president of the Small Business and Entrepreneurship Council, says she is vehemently against the new legislation, which was introduced in Congress yesterday and is backed by President Obama. The bill would allow workers to unionize when more than 50% sign a card stating their support rather than requiring a secret-ballot poll of workers. Employers would also be required to set up a mandatory binding arbitration system facilitated by a government arbitrator when contract negotiations aren’t reached within 120 days. The arbitrator’s decision will be binding for two years, without option of appeal.

Ms. Kerrigan says small businesses are particularly vulnerable because they don’t have staffs to adequately manage labor relations and rely on their nimbleness to survive in the tough economy — something that unions tend to hinder. “It is unimaginable that legislation such as ‘card check’ could be seriously considered given the serious shape of our economy, let alone our modern and global marketplace,” she said in a statement. The legislation “shows how out of touch Congress is when it comes to running a business and the workings of our global economy.”

Ms. Kerrigan says she wouldn’t be surprised if Congress inserts language that exempts small businesses under a certain size, though she would rather see the legislation go away altogether. Brad Close, vice president of federal policy for the National Federation of Independent Business, says he also expects labor-union supporters will offer to include an exemption based on a business’s size. But his group plans to fight the bill either way. “Those small businesses that employ 300 or 400 employees are huge job creators” and the ones most likely to be hurt by easing unionization rules, he adds.

NFIB and the U.S. Chamber of Commerce plan to spend $200 million on ad campaigns and lobbying to fight the measure, according to Bloomberg News. Mr. Close, however, says NFIB plans to fight the bill mostly using grassroots efforts and encouraging its members to write and call their congressional representatives.

Franchisers also have big plans to oppose it. The International Franchise Association said in a statement: “IFA’s top legislative priority is defeat of this anti-worker, anti-competitive and anti-small business legislation. This bill is nothing less than a ‘gag order’ on American small businesses in a union campaign, and it is a serious threat to virtually all franchise businesses. Defeating it will require the full engagement of the franchise community.”