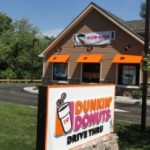 Stephanie Riefe reports at SimsburyPatch.com that the new Dunkin’ Donuts — located at 142 Hopmeadow Street in Weatogue — is open for business.

When construction broke ground several months ago the idea was to be open this summer. Mission accomplished. It has been open just under a week.

The donut shop is 1,800 square feet and has seating for 24 patrons (tables and chairs and counter seating). The new Dunkin’ has Wi-Fi, a flat-screen television set on the wall and a modern café interior, all with the Dunkin’ Donuts colors and logo. In fact, the door handle is a giant D. There is also a drive through.

The building next door at 138 Hopmeadow Street was taken down and rebuilt on the same footprint in a saltbox style. It will house retail of some kind. Tom Evans is the owner of the properties.

The site of the Dunkin’ Donuts was where Wasabi was located. That building was taken down in February.

This is the town’s fourth Dunkin’ Donuts. There is one located in the same plaza as Andy’s Supermarket, one near Antonio’s Restaurant and another close to Staples on Route 44.