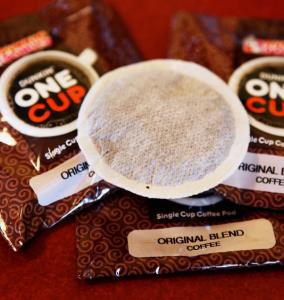 Katie Johnston Chase reports in The Boston Globe that earlier this week in a limited number of local stores, the Canton-based company started selling Dunkin’ One Cup, individual packets of coffee used in single-cup home brewers.

“It’s a great way to get more people drinking more Dunkin’ coffee,’’ said Karen Raskopf, senior vice president of communications at Dunkin’ Donuts, who declined to say which or how many stores are participating in the test.

It’s also a great way to get in on a trend.

Single-serve coffee sales have exploded, with sales up 101 percent over the past year in supermarkets, drugstores, and mass-market retailers not including Wal-Mart, according to SymphonyIRI Group, a Chicago-based market research firm. Overall, coffee sales were up just 3 percent during the same period.

“Anybody that’s in the coffee business that isn’t looking at a way to have their coffee consumed in a single-cup brewer is going to most likely lose share over time,’’ said Mitchell Pinheiro, a food analyst with the Philadelphia financial services firm Janney Montgomery Scott LLC. “The bottom line is everybody’s going to get into it, or try to.’’

The five varieties of Dunkin’ One Cup are made for machines that brew coffee much like traditional full-pot drip machines do, as opposed to the one-cup machines made by the Reading-based Keurig that use heat and pressure to brew its individual-portion K-Cups. Dunkin’s packets, which retail for $3.99 per eight-serving box, can be used in single-serve machines made by Mr. Coffee, Senseo, Cuisi nart, Black & Decker, and others.

Dunkin’ Donuts has plenty of competition in the single-serve game. Green Mountain Coffee Roasters Inc. owns Keurig and offers several brands, including Newman’s Own Organics and Folgers, in its K-Cups, and it controls 85 percent of the market, according to Janney. Starbucks Corp. ventured into the single-cup world with its Via Ready Brew instant coffee packets at the beginning of the year, and in 10 months the company has sold $100 million worth of Via, a company spokeswoman said.

The single-cup coffee craze can be attributed to two factors, said Pinheiro: convenience and taste. Mom can get up at 6 a.m. and make herself a cup of decaf, and Dad can brew a fresh, fully caffeinated cup a few hours later.

“There’s nothing worse than drinking coffee that’s been sitting on a burner for two hours,’’ said Pinheiro, who owns stock in Green Mountain.

Read More at: The Boston Globe