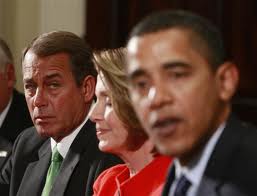 David Lightman writes in McClatchy Newspapers that Lonny and Robin Kocina started their business in the laundry room of their house more than 20 years ago, and they now employ about 45 people. However, they worry that Washington lawmakers are about to stifle their effort to keep their business growing.

When members of Congress return to Washington on Monday after a nearly monthlong recess, Topic A will be taxes.

Should the Bush-era tax cuts be extended? Should the top individual income-tax rates, now 33 and 35 percent, return to the pre-2001 levels of 36 and 39.6 percent, as President Barack Obama and Democratic congressional leaders want?

House Minority Leader John Boehner said Sunday he is willing to back tax cuts only for the middle class if that’s the only option he’s got – though he emphasized it would be “bad policy,” and that he wants Bush-era cuts extended for everyone.

The Ohio Republican, who stands to be Speaker if Republicans gain control of the House of Representatives this fall, wants to maintain the lower rates in the top two brackets that affect the wealthy.

His view is a signal that Democratic leaders in the House could have an easier-than-expected path to passage before the November election. But the Senate, where 60 votes are needed to limit debate, will be a tougher task. Three Democrats have said they want all the cuts extended. Democrats control 59 seats.