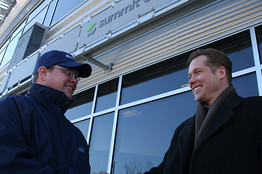 Unable to get loans at banks, more small-business owners are turning to credit unions.

Most credit unions didn’t get in on the subprime-loan market, so they’re not smarting from multibillion-dollar losses like many banks. Many also have extra cash because deposits increased in 2008 as more investors abandoned the stock market and sought greater certainty in savings accounts. So credit unions are more able — and willing — than most of their banking counterparts to dole out money to small businesses.

About 27% of the 8,147 credit unions in the U.S. offer business loans, according to the Credit Union National Association, a trade group based in Washington, D.C. The amount of business loans was up 18% last year to almost $33 billion from nearly $28 billion in 2007. The average loan size is about $215,000.

Many credit unions say they would lend out even more money if they could. But a 1998 federal law caps the amount of business loans credit unions can have at 12.25% of assets. The banking industry opposes any changes to the legislation, but credit unions hope to convince Congress to introduce legislation to lift the cap. Last year, a bill was introduced to raise the lid to 20%, but it didn’t garner enough votes.

“We believe credit unions could provide $10 billion in small-business loans within the next 12 months without costing taxpayers a nickel,” if there wasn’t a cap, says Larry Wilson, president and chief executive of the Coastal Federal Credit Union in Raleigh, N.C., which is about $5 million from hitting the 12.25% limit. It has a total $250 million in loans on its books.

Mr. Wilson says without the limit, Coastal alone could make about $165 million more in loans to small companies over the next 12 months. He says the 189,000-member credit union is processing $39 million in loans right now and is in the beginning stages of another $55 million in loans.

Credit unions are chartered as nonprofit cooperative institutions owned by their members. Like other financial institutions, however, they are regulated, and deposits of up to $250,000 are insured.

Kenneth Beine, president and CEO of Shoreline Credit Union in Two Rivers, Wis., says the credit union has seen more “Main Street” loans coming to them as traditional sources of funding have dried up. Last year, Shoreline made $10 million in business loans, up from less than $1 million a year earlier, without advertising.