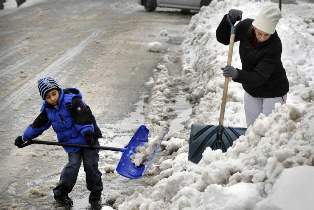 Denise Lavoie of THE ASSOCIATED PRESS reports in the Worcester Telegram that property owners may be held liable for snow-related injuries whether the accumulations are caused by Mother Nature or by snowplows, the state’s highest court ruled yesterday in a far-reaching decision that lawyers said could result in a wave of personal injury lawsuits.

In its ruling, the Supreme Judicial Court eliminated a long-held distinction in state law between “natural” and “unnatural” accumulations of snow and ice.

For more than a century, case law in Massachusetts held that property owners who failed to remove natural accumulations could not be held liable. But the court found that owners have a duty to keep property reasonably safe.

“The biggest effect is that people who have suffered injuries as a result of the negligence of the landowner will be able to seek compensation, even in cases where the snow or ice accumulated naturally,” said David White, a Boston personal injury lawyer.

“The other effect is that landowners will probably be more cautious now and treat their ice and snow,” White said.

The court ruled in the case of Emanuel Papadopoulos of Peabody, who broke his pelvis in 2002 when he slipped and fell on a patch of ice in the parking lot of the Liberty Tree Mall in Danvers in front of a Target department store.

The parking lot had been cleared, but a pile of snow had been plowed onto a median strip.

After leaving the store to return to his car, Papadopoulos slipped on ice on the pavement.

A judge found that whether it was a chunk of ice that had fallen from the median or a patch of refrozen runoff from the snow pile, the ice that caused his fall was a “natural accumulation.”

The judge granted a motion by Target and Weiss Landscaping Co. Inc., the snow removal contractor, to dismiss the lawsuit, citing Massachusetts case law that found that a property owner cannot be held liable for failing to remove natural accumulations.

The Supreme Judicial Court rejected the rationale behind those earlier court rulings — that a natural accumulation of snow or ice is not a defect that a property owner has a duty to repair.

“We now will apply to hazards arising from snow and ice the same obligation that a property owner owes to lawful visitors as to all other hazards: a duty to ‘act as a reasonable person under all of the circumstances including the likelihood of injury to others, the probable seriousness of such injuries, and the burden of reducing or avoiding the risk,’ ” Justice Ralph Gants wrote in the unanimous ruling.

The court said the new rule will apply retroactively to pending lawsuits. It sent the Papadopoulos case back to the lower court to reconsider its ruling dismissing his lawsuit.

Papadopoulos’ lawyer, Emmanuel Papanickolas, praised the ruling, saying it imposes a responsibility on property owners “to make a reasonable effort to remove the snow and the hazards of freezing snow and ice.”

“The jury decides what’s reasonable,” he said. “It’s a great decision for the state of Massachusetts. It’s in the interest of public safety.”