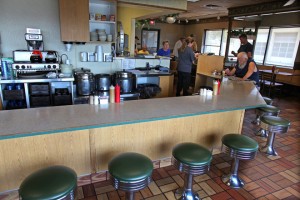 The coffee is hot and the stools at the counter are familiar, but after 50 years as a George Webb restaurant, this café at 7510 W. Layton Ave. in Greenfield has bolted from the venerable Milwaukee brand. Other locations are following suit.

Doris Hajewski of the Milwaukee Journal Sentinel  reports that the George Webb restaurant chain is a little smaller, with the loss of eight locations run by operators who didn’t like terms offered by the new owner.

Don Hensiak, who with his brother Robb has been a 20-year franchise owner, owns five of the locations. Diane Neavins owns the Menomonee Falls location and will operate as a Griddlers Cafe under a franchise agreement with Hensiak.

“We had a decision,” Don Hensiak said. “Do I go independent or sign a 10-year agreement with someone I didn’t know very well?”

In addition to the Hensiaks and Neavins, franchise operators in Appleton and Burlington decided to leave the Webb franchise system.

The defections are the latest in a series of challenges for the longtime burger haven.

Stamm’s father, Dave, bought Webb from the founding family in 1985. In 2005, he sold it to Jayne Aliota, who was a manager at the Webb headquarters.

After several years of financial turmoil and lawsuits involving Aliota, the ownership of George Webb passed to M&I Bank, which held a loan that financed the business. A year ago, Philip Anderson, who also was a lender to Aliota, bought the Webb assets from M&I.

“We had to make sure we had a franchise agreement uniform with the brand,” Stamm said.

The new agreement calls for higher franchise fees and requires standardized menu items at all locations, Stamm said. The new agreement is more of a typical food industry franchise deal than what Webb operators had in the past, he said.