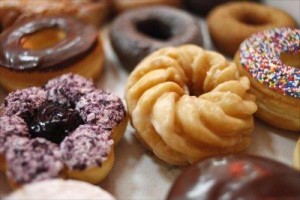 Selena Ross of the Chronicle reports that for something so sweet and beloved, Timmys doughnuts are causing a lot of bitterness in an Ontario courthouse and beyond.

The bad feelings over the doughnuts are spreading to Nova Scotia as local Tim Hortons Inc. franchise owners watch a $1.95-billion class action unfolding in a long, faraway court fight, with their products and profits dissected in the news — a kind of attention they never asked for.

The company has been battling with two Burlington, Ont., franchises for three years, since the store owners claimed damages for breach of contract. The case is awaiting certification this week and next in Toronto.

Tim Hortons’ switch to pre-baked frozen doughnuts hurt their profit margins, store owners Arch and Anne Jollymore allege in court documents filed in 2008 in the Ontario Superior Court of Justice and updated last November. Arch Jollymore, a cousin of company co-founder Ron Joyce, was a corporate officer with Tim Hortons for many years before retiring and buying two franchises.

Tims frozen doughnuts have been shipped to stores across Canada since the early 2000s from a factory in Brantford, Ont., although Nova Scotia only made the switch in 2003.

The doughnuts ended up costing about 50 per cent more than head office promised, at a markup that is not “commercially reasonable,” the Jollymores claim.

Baking doughnuts in-store used to cost eight or nine cents per doughnut, according to the court documents. Before signing on to the frozen doughnut movement, called Always Fresh, store owners were told the price would increase “modestly” to 12 cents per doughnut but they would save money through improving quality, eliminating bakers’ salaries and reducing the amount of baked goods thrown away.

Instead, the stores say they have found over the years that the price of each doughnut is much higher — about 20 cents, according to the original court claim — and they are required to buy from the Brantford plant at that price.

Store owners’ income as a percentage of sales has dropped by 3.5 per cent since 2002, the suit alleges, and the plaintiffs and other franchise owners say they have collectively sustained damages of $100 million per year.

The suit, if successful, would mean a payout to Tims franchise owners across the country. It would also be a huge hit to the Tim Hortons corporation, which last year brought in net revenue of $2.54 billion, just $600 million more than the damages claimed in the lawsuit.

Still, some Nova Scotia franchise owners say they are frustrated by the court action and don’t agree with the Jollymores’ claims. One owner described the case as a small matter of infighting that doesn’t represent the views of owners across the chain.

“It’s well-known that the overwhelming majority of the franchises do not support this action whatsoever,” said the store owner, who didn’t want his name printed. “It will do nothing to benefit them or the brand.”

Many of the Tim Hortons stores in Nova Scotia are owned by individuals who have just one or two stores each, said another store manager, who also did not want to be named.

Profits have climbed for Tim Hortons Inc. in the last few years with an expansion into the United States and Europe and a new partnership with Cold Stone Creamery.

Read More at: The Chronicle