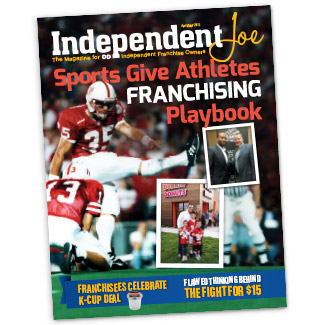 As the clock ticks down, when the last points have been scored and the cheers have gone silent, many professional athletes are left wondering what comes next. For more and more athletes, the somewhat surprising answer is franchising. In increasing numbers, athletes are hanging up their uniforms in exchange for a partnership with leading chains, putting their money and their names behind some very prolific brands. While there are no official stats on how many athletes are turning to franchising, there is a growing roster of names that reads like a who’s who of professional athletes. NFL quarterback Peyton Manning may be the most visible, as both a franchisee and the face of Papa John’s pizza in television commercials. Tennis ace Venus Williams is behind five successful Jamba Juice locations serving up fruit smoothies in the Washington DC area and Keshawn Johnson leads an all-pro group of investors who have opened several Panera Bread franchises in southern California.

As athletes think about their off-the-field careers, there are constant reminders that the road ahead is paved with well documented failure. A 2009 Sports Illustrated investigation estimated more than 75 percent of NFL players (who earned $5.5 million, on average) run out of money within two years of leaving the league and more than 60 percent of NBA players (who earned $1.9 million, on average) are broke within five years. 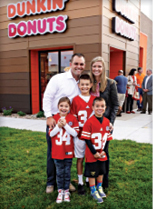 Former placekicker Kris Brown was determined to not be one of those statistics. After a record-breaking career at the University of Nebraska, where he was part of two national championship teams, Brown spent 12 years in the NFL, playing with the Pittsburgh Steelers, Houston Texans, San Diego Chargers and Dallas Cowboys. But even as his football career was taking off, Brown was always thinking about his next move.

“When you’re playing you’re constantly inundated with data and information about the staggering statistics about what happens when you’re done,” the Texas native says. “I had this recurring nightmare for my first six years of playing that I would be done and would sit down to write a resume and have nothing to write.”

To combat that nightmare, Brown got an internship in the offseason for his first six seasons in the NFL. “It gave me an idea of what I liked and what I didn’t like.” When he left football for good in 2011, he explored his options and zeroed in on Dunkin’ Donuts. It was a brand he had grown up with in Dallas and he knew it had a loyal following. He signed on with two other partners and is now CEO and co-owner of the Berliner Group, which operates four Dunkin’ restaurants in Kansas City and Omaha. The group is planning openings for four more Dunkin’ shops this year and five more in 2016.

That transition from sports to business isn’t always so smooth for former athletes and the NFL, among others, has recognized that. The NFL Players Association has partnered with Babson College, a top-tier business school in Wellesley, Mass., to create a program that helps give former NFL players some business basics. The program is designed to help them decide if owning, partnering or investing in a business makes sense as their next move. Many of them have the money in the bank, but no plan in place. Babson Professor Angelo Santinelli says the program gives them the tools to ask the right questions about investing their money.

“You’re not taking the risk of establishing a new brand. The brand is already established. It’s a lot different joining a franchise than starting a restaurant. It’s not in their interest to see you fail.”

That franchise framework is important, says Brown. “We are so used to structure. I think that’s where a lot of guys struggle. Your whole life has been structured. You leave and there’s none at all.” Players put in the work and the hours, but at the same time are told where to be and what to do. “I think the franchising world gives that structure that athletes are so used to.” 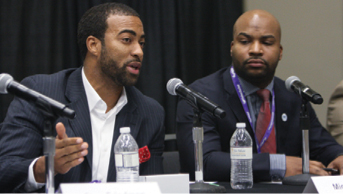 The PAFI has created a playbook to help athletes transition from the field to the franchise. Founder Michael Stone (far left) says franchising closely parallels the players’ experience

While that doesn’t mean franchising is an automatic victory for these former pros, Michael Stone, an NFL safety for seven years, believes it can be the winning strategy for success as a second career. Stone is the Executive Director and founder of the Professional Athlete Franchise Initiative (PAFI.) A member of the Arizona Cardinals, St. Louis Rams and Houston Texans, Stone ended his career in 2008 playing for the New York Giants. He says he founded PAFI because he saw a need for helping players transition to a life after sports. After a meeting with former NBA player Junior Bridgeman, who owns more than 300 restaurant franchises worth an estimated $250 million, Stone decided franchising was a near perfect form of entrepreneurship for athletes because it parallels their experience.

“As a player, I wasn’t asked to make the playbook or the formations. I wasn’t asked to think about the marketing or how we were going to get people to come to the games. I was given a playbook and I was there to execute it, with some coaching along the way. That’s pretty much what a franchise does. You’re given a playbook for the business, you get some coaching and you execute it.” 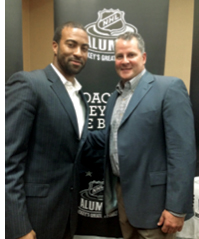 Since its founding, PAFI and its parent organization, the International Franchise Association (IFA), have partnered with more than fifty brands and helped hundreds of athletes explore opportunities in the industry. Their mission is to educate athletes about franchising. PAFI puts franchisors and potential franchisees together and gives players the tools to help them make smart business decisions. One of the challenges, Stone says, is managing the expectations of a population that, for the most part, has only known success in their professional lives.

“What we are is a resource for guys to build a network,” says Stone.

They help them build that network, in part, with the PAFI Annual Franchise Summit. The three-day conference puts athletes with a variety of sports backgrounds into classroom sessions that cover the X’s and O’s of franchising. It’s a new playing field and subjects of study range from finance to law to the day-to-day operations. The athletes are taught to do their own due diligence and decide what brand best fits their lifestyle and expectations. In turn, chain representatives have an opportunity to meet the athletes. They don’t just turn over the keys, athletes are put through the same rigorous screening as any prospective owner. Stone says their attendance has grown every year and they’re now seeing athletes who are now successful franchisees come back to mentor those who are just starting on this second career.

One of those mentors is Brown. He has participated as a panelist at the Summit and says he relishes the opportunity to give back to his fellow athletes.

“I try to really communicate to them what the experience will be like so, if they make a decision to go into this business, they’ll be well aware of what it takes to be successful.”

Any franchise owner will tell you leadership is an important part of the job. Brown says teamwork should also be considered a key to success in franchising. Leaders know how to best place workers where they belong, empower them to do their job and make sure everyone not only shares the vision, but understands they have a role in it.

“You understand that the sum is greater than the individual parts. That’s the first thing that athletes bring to the business world.” But he says there’s more. “Obviously, hard work. You’ve got to be a hard worker, you’ve got to have dedication and a clear sense of purpose.”

And most important? The will to win, the competition of it all.

“As an athlete, you’re extremely competitive. The business world is the fiercest competition that you’ll ever face, even more so than athletics, because it means your survival. You’re trying to go out and win one guest over every day. And that, in and of itself, is the challenge.” 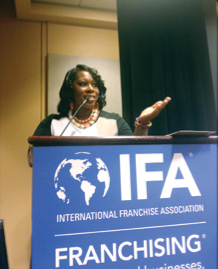 As a partner of the International Franchise Association, PAFI has forged strong connections with many of the most successful brands

Stone points out many professional athletes spent years honing their leadership abilities and have demonstrated those abilities in high-pressure situations; it’s second nature for most athletes, he says.

“Athletes know how to rally a team, how to manage, how to lead and how to follow, which is just as necessary at times. The skills are very similar to those of a successful franchisee.”

As Brown considers the parallels between his life as a franchisee and his life as a top collegiate and professional football player, he can’t help but find a parallel to Dunkin’ Donuts and an NFL franchise. His answer: The team that first drafted him, the Pittsburgh Steelers.

“Dunkin’ has a long history, just like Pittsburgh does. A Steelers fan is there every year, just like the loyal guests of Dunkin’ and they’re going to be there through thick and thin. They love the brand and they start ’em young.”