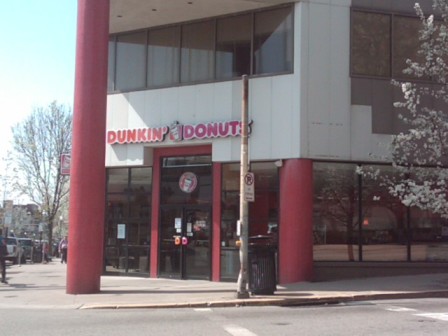 Squirrel Hill is a section of Pittsburgh known for its ethnic restaurants, old fashioned grocery stores and trendy boutiques. It is also home to a very different kind of Dunkin’ Donuts shop. Opened less than a year ago, the store is big—over 2,000 square feet—and features a sitting area with bookshelves, a fireplace and flat screen TVs.

“We want people to stay and enjoy the atmosphere,” said Robyn Frederick, Vice President of Marketing for Heartland Restaurant Group, which operates ten Dunkin’ shops. “We are not just a morning coffee stop. We are a lunch place and a way home from work place to stop.”

Because Squirrel Hill is a densely populated, walkable neighborhood, the store gets a great deal of foot traffic. It is located on a corner of a busy street with views of the hustle and bustle of the area, Frederick says it is a great location but that does not guarantee success.

Before Heartland Restaurant Group opened their Dunkin’ franchise, this location was a two-time loser. Both Boston Market and Wendy’s failed here. Frederick believes that’s because those restaurants failed to ingratiate themselves to the community.

“That community can make or break you so you have to embrace them. For us that means doing things differently,” she said.

One of those things was embracing the largely Jewish population in the community. “We are the only fully kosher bakery and coffee shops in Squirrel Hill,” said Frederick. “At Hanukkah we make special jelly donuts because that’s what the community wants.” 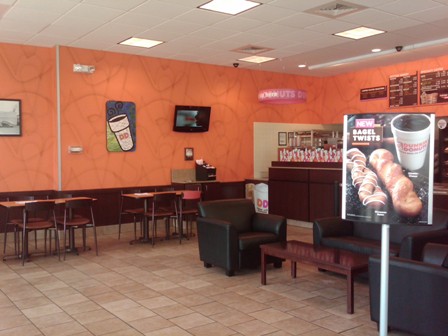 In fact, the store’s menu reflects the neighborhood. They don’t serve flatbreads or meat. Instead, they use veggie sausage and veggie bacon. Even their bagels can accommodate a kosher diet plan because they are cooked in separate ovens from other products to maintain Parve. Having a specialty menu is possible because they do all their baking on premises.

Aside from catering to the Jewish community, the Squirrel Hill store also has a special program for nearby college students. “We are right by the campus of Carnegie Mellon University so we decided to get on their meal plan,” Frederick said.

Students who buy a University meal card can use it at the store to buy coffee, donuts or sandwiches. “A lot of kids eat their meals here,” said Frederick.

Even before it opened, the owners of the Squirrel Hill Dunkin’ Donuts made a concerted effort to get to know the community. “We had a meeting with the Rabbi and local school officials to let them know the store would be completely kosher. Then during our 10-day training period, we gave the temple and the schools the baked goods we made during the practice sessions. People loved that,” said Frederick.

The store is a popular destination for school field trips. Recently, 28 second and third graders from St. Edmund’s Academy toured the store and decorated their own donuts. It was a big hit. 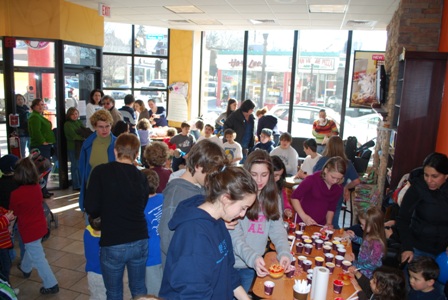 Students from the Community Day School and their Rabbi to celebrate Tu B'Shvat, also known as the “Birthday of Trees”

In January, when Jews celebrate Tu B’Shvat, also known as the “Birthday of Trees”, the store welcomed students from the Community Day School and their Rabbi for music and cooking. To commemorate the holiday, students made donuts out of fruits and nuts

Connecting with the community has been a sweet recipe for success says Frederick. “People in the neighborhood tell us how happy they are that we are here and have promised to support us,” said Frederick.