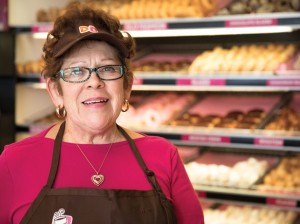 Competition doesn’t scare Irene Deubel. As the only Dunkin’ Donuts franchise owner in Santa Fe, New Mexico – and an employee of the business since the early 1970s – Irene has seen it all.

At one time, New Mexico’s capital city had a Mister Donut, but it long-ago shut down. The closest Dunkin’ is 50 miles away in Albuquerque. In the competition for donut dollars, Santa Fe has several choices. There’s Whoo’s Donuts, an organic, high-end bakery which sells organic donuts for $14 for a dozen, compared to the $8.99 at Deubel’s shop on Saint Francis Drive. Local supermarkets, such as Walmart and Smith’s offer frozen products, but, according to Deubel, “They aren’t the same.”

Later this year, Krispy Kreme will open shop in Santa Fe. Deubel says the store is expected to open just in time to attract the tour buses headed to the Albuquerque Balloon Fiesta in October.

“I tell my staff we’ve got to watch closely once Krispy Kreme goes in,” she says. “I’ve never had a direct competitor like them. People tell me, ‘Oh, their coffee is really bad,” or, ‘The donuts are too sweet.’”

When it comes to coffee, there’s plenty of competition. At santafe.org, the official travel site for the city, a person can sign up for a guided coffee tour, which stops at gourmet shops like C.G. Higgins Confections, Liquid Outpost and Ohori’s Coffee Roasters. In addition, Santa Fe is home to three Starbucks as well as McDonald’s and other mom-and-pops. But, Deubel doesn’t believe they are hurting her sales.

“I thought Starbucks would influence it, but it did not,” she says. “I run different specials on Saturday, Sunday and Monday, and people ask us ,‘Why can’t you have the same sales every day [like Starbucks does]?’ but it brings people in.” Even though Starbucks or McDonald’s have more consistent specials, customers tell them why they prefer the local Dunkin’ store. “People say we can get it out faster than McDonald’s can, or that our sandwiches are better,” she says.

Hers is a story of perseverance and of love. Deubel can’t hide her affection for the Dunkin’ brand. Like so many long-time franchisees, she got her start as a baker, but quickly learned what it means to run a business. Even as Dunkin’ Donuts retreated from markets west of the Mississippi during the 1980s and 90s, Duebel’s shop has kept the lights on, 24 hours a day, beating back all competitors with consistently hot, fresh coffee and delicious donuts. Here in the desert, donuts are the draw, accounting for a greater portion of sales than in other long-established markets. 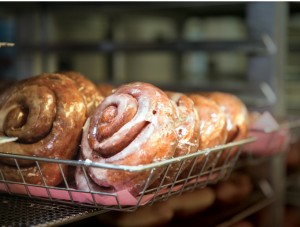 Deubel first joined Dunkin’ in 1972, after her sister Isabel began working there and told her the shop needed a finisher—someone to frost, fill, and put final decorations on each donut. She started shortly before Valentine’s Day and loved the creativity in the confections. “I had a blast,” she says. My boss had a book about preparing fancies, and I loved it. I have nervous energy and need to be busy.” Deubel worked while another sister, Betty Jo, watched her nine-month old daughter, in addition to her own children.

When her boss offered to raise her pay by a quarter an hour to become a baker, “I never thought I could do it,” Deubel remembers. “There were never any women bakers. But I took the job. It was hand-cutting, and I was taught to pound the donuts out, flip them, and put them on a screen. My hands hurt so much—I had a bruise in the middle of my palm.”

She persevered, baking 276 dozen donuts during her eight-hour overnight shift. “I am right handed so when I cut donuts, the fingers on my left hand were able to hold about 18 donuts before I had to put them on a screen,” she says. “People would watch me work in a big window, and if I missed one, it would hit the table. People would count how many donuts I could hold.”

Today, everything is automated, and the days of balancing donuts by hand are behind her. Deubel held jobs as assistant manager, then manager, before she and a co-worker, Randy Schelly, raised the money to buy the shop in 2005 from Robert Amelunxen, the previous franchisee. In her first year as owner, sales were about $78,000. Ten years later, sales topped $1.6 million.

“I watch the numbers monthly and we go up about 10 percent every month,” she says.

In 2012, she decided to go it alone and bought out her partner. Two years later, having secured $180,000 in loan and grant money from Century Bank and the Federal Home Loan Bank of Dallas, she gave the store a facelift, which included a new roof, oven, furniture, outdoor awning and a digital menu board. 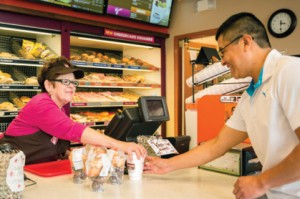 But even with new equipment, things still sometimes stop working. When that happens, Deubel turns to her husband Chris, who spent three decades as a machinist. “He maintains all the machines, and takes care of the trees and a shed for our equipment,” she says. “He’s very meticulous and a great help to me.”

Deubel’s daughter Jackie spent seven years working at Starbucks before joining the family business. “She brought a lot to the customer service arena, because Starbucks caters to the customers,” says Deubel. “She does very good employee training, too. She’s better than me—I get agitated when people don’t learn quickly enough.”

Deubel has two other children. Jolene, 31, who is raising infant twin boys, and Justin, 27, who works for the Public Records Retirement Association of New Mexico. All three of her kids have worked for Dunkin’ at some point in their lives. The store is open around the clock, 364 days a year (they close on Christmas). Keeping the business running fits their family tradition of hard work.

“When I was growing up, my dad had a taxi service and my mom worked in a restaurant, and then they bought a grocery store,” says Deubel. “We weren’t allowed to sleep late; we had to open the store at 6 a.m. I was 15 when I started working for them.”

Today, Deubel has 20 people on staff. She likes to hire high school students when they’re in tenth grade so they will work for her for two-to-three years before they leave for college. She also has two part-time and three full time bakers, who together have nearly 30 years of experience working in her shop. “They are really, really good,” she says. “I hope they will always stay with me.” 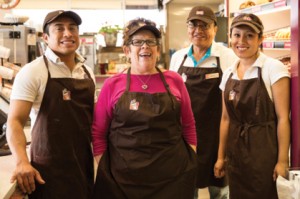 Dollars to Donuts: What She’s Learned

In her 43 years working at Dunkin’, Deubel has learned a lot about donuts. In Santa Fe, the treats are still big sellers. “We sell more donuts than we do coffee,” she says. Her store’s biggest sellers are glazed, chocolate frosted, and Boston Kremes, but the maple frosted are her favorite. So, when she heard that Krispy Kreme made a maple frosted donut as well, she and Chris took a trip to an Albuquerque store to try them. She wasn’t impressed.

“They glazed the donut first, then put the maple on top,” she says. “On the donut I got, the glaze was cracking—it wasn’t really fresh. Plus, the coffee was really bad.”

Chris, however, enjoyed the jelly-glazed donut he ordered, which inspired Deubel to make something similar in her shop. “I can create anything they have,” she says. “We glaze the shell you put the jelly into, then put the jelly in after it has dried. It’s really good,” she says. It’s not the only time Deubel has been inspired from a visit elsewhere. On a trip to Massachusetts, she first saw a Boston Kreme munchkin, then brought it back to Santa Fe, where they have been well received.

Besides improving business through innovation, Deubel says cultivating reliable employees helps her keep the store going strong. “Having trustworthy people working on staff makes a big difference. I thank my crew every day for being there; they’re all very honest,” she says.

Relying on her crew helps Deubel fully enjoy her time away from the store. She typically works four 12-hour days and takes a three-day rest. “Unless there’s something major, I try to stay away from the shop,” she says. She and Chris enjoy fishing, hiking, and walking their three dogs—a Labrador named Winnie, a Lab-mix named Roxy, and Rat Terrier named Pete. The family has a vacation home in Chama, a village along the Rocky Mountains in northern New Mexico. Deubel loves to read while traveling. James Patterson and Anne Rice are her favorite authors.