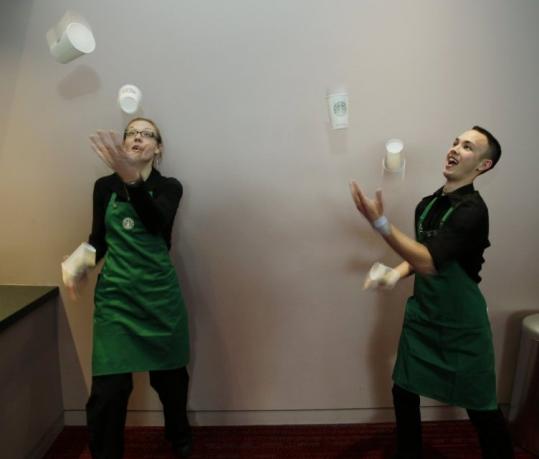 Starbucks Corp. chief executive Howard Schultz plans to expand marketing to shore up the company’s position as a coffee authority as it faces competition in the United States from McDonald’s Corp. and Dunkin’ Donuts Inc.

Starbucks, the world’s largest coffee shop operator, is testing improved equipment, rolling out new espresso machines in 4,000 cafes, and promoting its fair-trade products that support farmers who grow the beans, Schultz said yesterday at the company’s annual meeting in Seattle.

“Lots of people selling coffee are making claims they’re better, but they’re not coffee roasters,” Schultz said at the meeting. “We are a coffee company first and foremost. The proof has to be in the cup every single time.”

Starbucks has been reluctant to discount its coffee, saying customers were willing to pay a premium for its high-end brand. Schultz has been fighting the perception that his coffee is a luxury as customers trim spending.

More than half of all drinks sold cost less than $3, and a third are under $2, Schultz told shareholders yesterday.

Cash from operations will be more than $1 billion this year and the company shouldn’t have to borrow money, according to chief financial officer Troy Alstead. Starbucks is “well on track” to cut $500 million in spending and will have more than $500 million in free cash flow this year, he said.