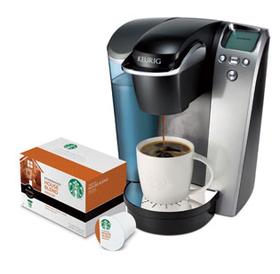 Expanding its coffee competition with Dunkin' Donuts, Starbucks is set to begin selling single-serving K-Cups in November for the Keurig coffee maker.

Starbucks Corp.  .. (Nasdaq: SBUX) said Tuesday that it will be selling single-serving K-Cups for the Keurig coffee machine in grocery stores in November, signaling a challenge to Dunkin’ Brands Inc.  .. (Nasdaq: DNKN), which this month began selling K-Cups in Dunkin’ Donuts franchises only.

Starbucks had previously launched its own single-cup system, Starbucks VIA Ready Brew, and said in its news release the first-year sales for the products surpassed $200 million. The Seattle-based coffee giant said it is seeking to build its K-Cup venture into a $1 billion business.