By AdministratorPublished September 4, 2011Category For Fun 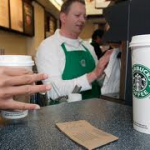 NewsBiscuit “The news before it happens” writes that leading coffee franchise Starbucks has announced that it is to counter the shortage of available locations for new outlets by opening branches of Starbucks inside other Starbucks.

The rapid expansion of the world’s leading coffee retailer had recently hit a ceiling when it was discovered that there were no more local corner cafés or small businesses to take over and replace with the global coffee giant. There were simply no more sites left to dedicate to selling disappointingly stodgy muffins or frothing luke warm milk for a 7,000 per cent profit.

Head of Marketing at Starbucks, Brian Monckton, explained: ‘Then we realized that we had acres of prime commercial space inside our own shops, and thought we could exploit that.’ Staff will be encouraged to compete against each other for customers and will be able to launch take-overs if particularly successful.

Monckton also revealed that the laboratories at the Seattle HQ of Starbucks were close to perfecting the ‘Nano-Latte’, a caffeine hit that could be inserted directly into the body at molecular level, thus ensuring greater coffee saturation of the world market. ‘The possibilities are endless,’ Monckton enthused. ‘By 2030 we are planning to have nano-Starbucks outlets surgically implanted in every stomach.’