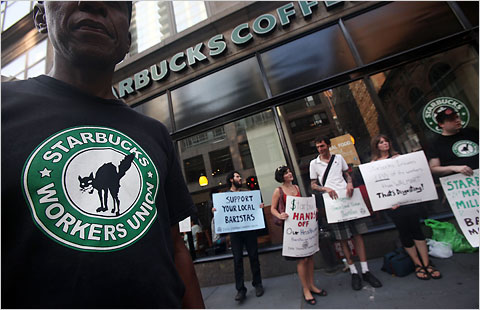 At a picket organized by the Industrial Workers of the World, Starbucks employees and their supporters protested a rise in their out-of-pocket health care expenses.

A. G. Sulzberger reports in the New York Times that Starbucks says it spends nearly as much on health insurance for its workers as it does on coffee, Starbucks recently announced that it would increase the amount that eligible employees need to contribute to keep their health care coverage.

On Monday evening, newly unionized Starbucks baristas gathered at the company’s regional headquarters in Manhattan to protest the move, which they said would effectively double the cost of their health insurance.

The change would increase the cost of the most basic plan to $20 from $12.50 each paycheck and the annual sign-up cost to $200 from $100, according to Liberte Locke, a barista who has been active in unionization efforts with the Industrial Workers of the World.

“If they’re going to charge us this amount, our pay needs to increase,” she said. She added that a growing number of employees were ineligible for the health insurance because they worked fewer than 20 hours a week.

A Starbucks spokesman said in a statement that the protest was the work of “a small group of people with an outside agenda aimed at promoting itself and its interest.”

The coffee company has battled with the union repeatedly, and in December, the National Labor Relations Board judge ruled that Starbucks had illegally fired three baristas and otherwise violated federal labor laws at several of its nearly 600 locations in New York City, in an effort to halt the unionization efforts.

A letter to all employees from Starbucks’s chief executive, Howard Schultz, dated July 27, warned that employees, whom the company calls partners, would have to pay more for their health care. (It also announced that matching 401(k) payments would continue, after warning last year that the matching payments might be suspended.)

“Despite this, Starbucks remains committed to providing comprehensive, affordable health coverage for our partners. While we hope the economy continues to improve and that we are able to see meaningful health care reform, Starbucks is committed to offering affordable health coverage,” the letter said. “Next year our most economical, basic health plan will be available for $20 a paycheck. In addition, there will be no changes made to our eligibility requirements, which makes our plan more generous than other major retailers.”