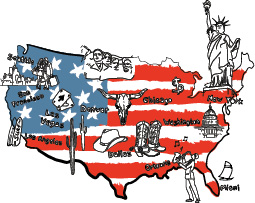 Why does Utah rank on top in U.S. economic outlook, while Vermont is on the bottom? When you examine the tax policies of the United States, you can draw certain conclusions about how taxes and regulations impact small business owners.

“A state tax system can boost or harm a state’s friendliness to business,” said Benjamin C. Litalien, founder and principal of Franchisewell and a professor at Georgetown University. And as Dunkin’ Donuts expands, it’s important to remember that states’ stiffest and most direct competition can come from other states. This means that business owners must be aware of the business climate in other regions, as well as in their own neighborhoods.

The good news for Dunkin’ franchisees is that 18 states cut taxes in the last legislative year, with some states such as Arkansas, Florida, Idaho, Indiana, Iowa, and Kansas cutting taxes and others modifying their tax code, according to ALEC. Litalin says these state tax policy changes reflect an emphasis on pro-growth reforms that encourage economic expansion and competition. While it may have been difficult to find states that actually reduced sales taxes, ALEC cites many states which cut personal and corporate income taxes as well as other state-specific tax categories.

States, of course, do not enact tax changes in a vacuum and the trickle-down effect on franchisees can be immediate. One clear example of that impact is in Nebraska, one of 24 states that comprise the “Streamlined Sales Tax Project”, a cooperative that seeks to simplify sales and use tax collection. Nebraska recently altered its sales tax policies relating to certain products (including donuts) and now collects different tax percentages for the same product—based on the retail operation selling the product.

“The new law is anticompetitive because it allows gas/convenience and grocery stores to sell donuts tax free while we, in most instances, are required to collect sales tax,” says Nebraska franchisee Bryce Bares, who is developing nine Dunkin’ Donuts in the Omaha market over the next five years. But, while Bares believes the inconsistency in that tax policy frustrates and confuses customers, he says many recent tax changes have been positive. “Any dollar returned to a franchisee is a dollar that can be reinvested in expansion,” he says.

This, of course, is just one of a multitude of examples of how state taxes affect the long-term health of small businesses, affecting everything from choice of franchise location to job creation. Each state is a microcosm of economic progress, ultimately affecting its standing as a place to live and do business. How do the different states stack up? Three states – Nebraska, North Carolina and Vermont– serve as barometers of economic competiveness as Dunkin’ Donuts expands west in markets across the country with a long-term goal of having more than 15,000 Dunkin’ Donuts restaurants in the United States alone.

Nebraska ranks near the bottom (#37) in the “Rich States, Poor States” report, in large part because of its high-tax burden. Other challenges for Nebraska include dividend taxes on individuals, relatively high corporate income and capital gains taxes, high property taxes and the imposition of a state death tax. But there’s momentum for pro-growth tax reform, as policymakers consider phasing out the income tax or repealing it entirely. As a commission studies options for fundamental tax reform, the state moved ahead with incremental tax cuts, such as eliminating the Alternative Minimum Tax (AMT), allowing business losses to be carried over 20 years rather than the five years it has been and expanding a capital gains tax exclusion for companies that establish employee stock option programs. And according to Forbes, states in the Heartland currently have a better business climate compared to those on the East and West coasts. To underscore that point, it noted that Lincoln, Nebraska’s capital, has the lowest unemployment rate in the U.S. at 3.5 percent; and mortgage delinquency rates there were third lowest in the country in 2011 at 2.8 percent.

These positive factors were all incentives for Dunkin’ Donuts’ return to Nebraska last year, with new store development in Omaha, Columbus, and Norfolk. While donut shops are no stranger to Omaha – Winchell’s, Donut Professor and Krispy Kreme are all familiar faces here – Dunkin’ sees a competitive opportunity in the state.

North Carolina seemingly faces a challenging path to tax reform, given its heavy reliance on personal income tax (27.9 percent) and corporate income tax (4.0 percent). But in January 2014, some relief materialized when a new tax law took effect replacing the former three-tiered income tax rate structure of 6.0, 7.0 and 7.75 percent with a flat rate of 5.8 percent, an interim rate which will fall further – to 5.7 percent – in 2015. Other changes include a cut in the corporate tax rate; an elimination of the estate tax on estates with assets in excess of $5 million, an end to the earned-income tax credit and a further tax break designed to help the working poor.

Further, the North Carolina state legislature is also weighing a plan to eliminate the income tax. According to the Raleigh News Observer, “The proposal would eliminate personal and corporate income taxes in exchange for higher state sales taxes levied against groceries, medical expenses and other currently tax-free services.”

In light of the fact that North Carolina’s business climate has generally lagged behind its regional competitors, this reform could catapult the state’s competitiveness and put it on a path to earn the status of one of the nation’s best state tax jurisdictions. According to the “Rich State, Poor States” report, these reforms would cut taxes by more than $500 million in the first two years alone, and more than $650 million annually by the 2017-2018 fiscal year. The reforms are among the most significant tax relief proposals any state has passed in the last decade.

Dunkin’ Donuts has been aggressively expanding in North Carolina and now has nearly 300 restaurants throughout the state. To help fuel the growth here and in other southern markets, Dunkin’ Brands has offered special development incentives, including reduced royalty fees for three years and up to an extra $10,000 in local store marketing for restaurants that open on time. While Winston-Salem-based Krispy Kreme once dominated the donut industry here, Dunkin’ Donuts is targeting locations like the highly desirable Charlotte market, home to nearly three million people. As the region continues to grow, the state of North Carolina becomes increasingly more attractive with employment increasing key development areas.

“Dunkin’ Donuts is looking for qualified candidates with foodservice, operations and real estate experience to join our team to help expand the brand’s footprint in Charlotte, Greensboro, Raleigh-Durham, Wilmington and Winston-Salem,” said Grant Benson, vice president of Franchising and Business Development for Dunkin’ Brands in a press release.

Vermont ranks dead last in “Rich States, Poor States” ALEC report. Vermont’s anti-business reputation is legendary and has earned the Green Mountain State a well-earned negative business reputation with rankings from Kiplinger’s, Forbes, the Tax Foundation and other groups. Vermont is consistently ranked somewhere between 40th and 50th worst in the nation as a place to do business. “It if moves in Vermont, tax it,” the authors of the ALEC report quip.

Damartin Quadros, a franchisee with restaurants in Barre, Berlin and Montpelier – the only state capital in the U.S. without a single McDonald’s within its city limits – says the level of taxation is infuriating. “We already have one of the highest meals taxes at nine percent, but still some towns in the Burlington area charging an additional point on top of that. It will impact some of our locations more than others.”

Small business owners often cite Vermont’s tax policies, strict land development regulations, high housing and utility costs as impediments to earning profits. The unfriendly business climate has led Quadros to wonder what it would be like to run a franchise somewhere else.

“I don’t have any experience with any other states, but all I see in Vermont are more challenges in the future,” he says.