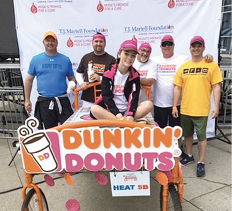 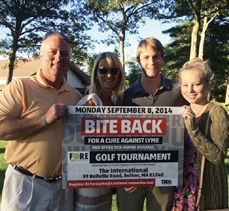 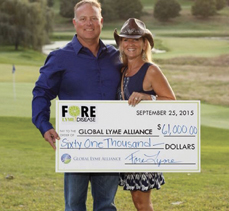 Steve Catalano knows firsthand that one person can make a difference.

Catalano has raised more than $180,000 for Lyme disease research since 2015, after his daughter contracted it. That’s a hefty sum in such a short time.

But he started giving back long before it became personal. A Dunkin’ Donuts franchise owner for 27 years, he has made a habit of getting involved with organizations that have a big impact in the communities where he has stores. It’s the way he has always done business.

“You have to step up and do things,” he says. “When we started out, we knew Dunkin’ Donuts was a very community-led business. Though it has a national name, it’s the individual stores that make a difference in the communities.”

For years he has been involved with his local rotaries. “You meet so many people, and are able to do so many good things for the community,” he says, adding, “Our employee base is part of that community.” That spurred meetings with other charitable organizations, giving him more opportunities to support the communities where he has a stake.

One of those organizations is Loaves and Fishes in Massachusetts, where Catalano operates 39 Dunkin’ Donuts restaurants. Their mission is to provide nutritious food to those who need it in six surrounding communities. Each year, the organization collects frozen turkeys to hand out at Thanksgiving, but they have nowhere to store them before distributing them. Catalano provides the freezer space in his stores.

“They get the turkeys and we house them,” he says. “I’m happy to do it, they’re a great organization.”

So when he recently entered the Nashville, Tennessee market, buying 19 shops, it made sense to connect with the TJ Martell Foundation. Started by music industry executive Tony Martell when his son was diagnosed with non-Hodgkins lymphoma, the foundation champions leukemia, cancer and AIDS research.

“They funded a whole wing at [Vanderbilt University] for research on cancer and AIDS,” says Catalano. “I did a tour of the building and when you see what the doctors are doing, the clinical trials, the labs, it’s just amazing.”

One of TJ Martell’s fundraisers takes place in Aspen, Colorado, where Martell’s industry connections come into play. Volunteer kids hang out at the bottom of the mountain and sell hot cocoa to the celebrities as they finish skiing down. Catalano donates the hot chocolate.

There’s also a gala in New York City, to honor people in the music industry who work behind the scenes.

But Catalano’s favorite fundraiser may be the bed race: each team takes a regular bed, puts bike wheels on it, and pushes it for two blocks through Nashville, from the Omni Hotel to the arena where the NHL’s Predators play. For the race this past May, his daughter sat atop the bed for the ride.

“We raised a ton of money and it was fun!” says Catalano. “What’s a better fit for Dunkin’ Donuts than a cup of coffee in bed?”

In 2014, Catalano tapped his experience as a fundraiser for a more personal goal. After his daughter contracted Lyme disease, Catalano, his wife Christin, and his business partner Chris Sargent created Fore Lyme. In its first year, the organization held a golf tournament which raised $50,000 for research into the debilitating disease.

“Our families deal with Lyme disease, it’s personal, but it goes beyond that,” he says. “We see people suffering with that, and to have the ability to give back to something we truly believe in is really rewarding.”

Looking ahead, he’s hoping to host a wine tasting in Massachusetts, where he resides, as a joint effort between TJ Martell and Fore Lyme. The proceeds will be split between the two organizations.

None of the community work Catalano does is for business profit – there’s more corporate visibility than a direct benefit to his stores. For him, it’s connecting with an organization he can relate to, one that’s doing important things for the community at large.

“When it’s something you can relate to and get behind, it’s not like doing work,” he says, “It’s a blessing.”