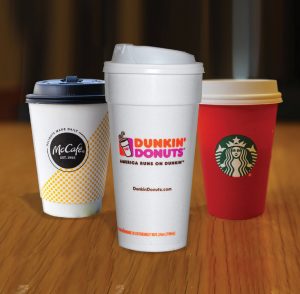 Vying to stand out among the competition is nothing new to a quick service restaurant. But recently, some have cast a questioning eyebrow at Dunkin’s middle-price point position in the increasingly crowded coffee marketplace. After last fall’s re-launch of McDonald’s McCafe coffee, analyst Jeremy Scott of Mizuho wrote: “We view Dunkin’s straddle between value-orientation and upmarket beverages as increasingly challenging in a marketplace where the spectrum of price points for both drip and espresso-based products continues to widen.”

With McDonalds re-igniting its efforts to attract the lower-priced coffee customer, and Starbucks continuing to lure the trend-conscious crowd, observers feel Dunkin’ Donuts’ challenge isn’t to mimic or chase either end of the spectrum, but to continue efforts to impress its own target customer.

McDonald’s first introduced coffee in 2001 in the U.S. with then-president Alan Feldman declaring it “gives customers another reason to visit McDonald’s.” The chain’s McCafe concept, launched eight years earlier in Australia and established in 17 countries before its U.S. premiere in Chicago, features lattes, cappuccino, fruit smoothies, teas and even scones, served on real plates with stainless steel flatware.

Despite its low price point, McCafe was not a huge hit for the Golden Arches. One Chicago franchisee who owns 18 restaurants told Crain’s Business in 2016, the concept “does too well to just get rid of it, but it doesn’t do well enough to be very excited about it,” Bloomberg Business painted a skeptical outlook for McCafe and its inability to sway the Starbuck’s crowd, despite its lower price point. “I don’t think they’re going to be attracting the Starbucks customer to go there — I really don’t,” Peter Saleh, an analyst at Telsey Advisory Group, wrote in the Bloomberg article.

Chris Kempczinski, president of McDonald’s USA, said in a press release accompanying the re-launch: “We understand how important the coffee culture is for consumers and we are committed to meeting that demand at the taste, convenience and value only McDonald’s can offer.”

“No doubt there is a cross competition between McDonald’s and Dunkin’,” according to John Gordon, principal at Pacific Management Consulting Group and DDIFO’s restaurant analyst. “The [$2 blended beverage] is a good discount, and it could be worrisome.”

On the other end: Starbucks

Dunkin’ had a firm foothold as a place for fresh, hot, coffee when Starbucks disrupted the coffee scene and changed the culture surrounding coffee. Starbucks made buying a cup of coffee (venti Macchiato anyone?) an event, and rejuvenated interest in the beverage among college students and young adults, something which has benefited the entire industry.

As coffee sales grew over the last 15 years, Dunkin’ Donuts and Starbucks solidified their customer base. The trend-driven Starbucks consumer is a contrast to the value-conscious Dunkin’ guest. Owner-operated Starbucks developed a larger post-noon following, while franchisee-owned Dunkin’ Donuts maintained its heavy morning attention. Perhaps the biggest differentiator is the atmosphere: with larger dining rooms, free internet access and homey décor, Starbucks has created an environment where guests can linger. At Dunkin’, speed of service and smaller footprint is designed to keep patrons moving and on schedule.

“Dunkin’ is leaning more toward the in-and-out, with smaller stores, and quick service; they’re not chasing Starbucks,” observes Gordon. “Starbucks may indirectly compete, but both brands have declared they’re not much of a threat to each other. “ 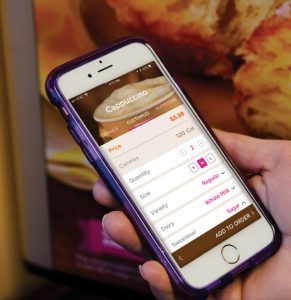 With the launch of its 2006 “America Runs on Dunkin’” campaign, Dunkin’ shone the spotlight more brightly onto coffee-based beverages, specifically targeting the on-the-go crowd. With its on-the-go ordering app and recently streamlined menu, Dunkin’ is pushing its beverage-led strategy.

That move has created a significant difference between Dunkin’ and McDonald’s, which uses coffee beverages as a low priced leader for its food. Dunkin’ does the opposite; low priced food, without discounted beverages. “The dream,” says Gordon, “is to trade a drip coffee customer to a more expensive coffee based drink.”

Gordon is among those watching Dunkin’s menu reboot.

“It’s unnoticeable by customers, but is intended to make things run smoothly behind the lines, and improve consistency from store to store.” It also helps eliminate the consumer stress that can accompany too many food choices, he says.

Confidence in the brand’s ability to meet the needs of their target customer is one reason California Dunkin’ franchise owner Matt Cobo doesn’t feel threatened. “I don’t want to compete with McDonald’s on price, [nor] with Starbucks on the perception of a great experience,” he says.

Instead, he puts his energy into satisfying his daily guests: coffee drinkers seeking quick service, a quality product, and a reasonable price.

“The way Dunkin’ Donuts is positioned forces us to differentiate ourselves by providing unexpected, exceptional customer service, while delivering good coffee at a fair price.” And, according to Cobo, “If we execute like we are supposed to as a brand – fast, accurate service, quality coffee, all with a smile – we can [remain competitive].”

Dunkin’ Brands has successfully used technology and innovation to remain competitive and meet the needs of its busy, caffeine-fueled guests. The popular DD Perks rewards program and on-the-go ordering have resonated with customers.

Curbside pickup, which enables customers to wait in a designated parking spot for staff to bring out their order, is also showing promise as a tool to retain customers, according to Gordon. He says it’s particularly promising for locations without a drive-thru, but can be challenging for franchisees who don’t own their real estate.

“Curbside relies on negotiating with a landlord to get a designated parking spot,” Gordon says, adding that this would come at cost. “It can’t happen on a massive scale unless the real estate supports it.”

Cobo, whose location just began a soft-launch of the service, is enthusiastic about curbside becoming a factor in his sales. Cobo’s customers beat the national average for using on-the-go ordering.

“It’s one more way to provide a great customer experience,” he says. “For example, for parents with small children; it can be difficult to get the kids unbuckled, and in and out.”

Delivery is being tested as another way to get coffee out to the busy customer. It’s a concept many QSRs are exploring in partnership with delivery services. Gordon believes it’s a good concept, provided fees don’t diminish its appeal. “In Boston, they’re using delivery services DoorDash and Favor, which take 30 percent, a large commission.” According to the Boston Globe, Favor also charges a $6 delivery fee, which is roughly three times the cost of the coffee.

Many industry experts believe Dunkin’s laser focus on beverages will keep the brand connected to its core customer—the coffee lover who appreciates a mid-price point and no-nonsense approach. Dunkin’s experiment with new signage, removing the word “Donuts” and focusing the brand on “Dunkin’,” furthers the brand’s commitment to being a beverage-led brand and a coffee leader and highlights the “America runs on Dunkin’” campaign. It’s a concept many franchise owners applaud.

“It’s too soon to tell, but anything that drives the beverage-focused mission statement can be good,” says Cobo, the California franchisee.

And, while McDonald’s reimagines its McCafe concept and Starbucks introduces hot food to accompany its soy lattes, Dunkin’ is keeping its focus on beverages and customer service, led by its franchisees.

“We can’t look to the franchisor to completely solve this with brand strategy, marketing, or operations. The franchisee knows what matters to the customer; that’s on us,” Cobo says. “We [need to] meet the expectations and demands of the customer in such a way that it propels them to come back to us.”