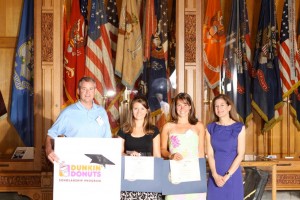 The franchisees honored the scholarship recipients at an awards ceremony held at State Capitol in Hartford. To cap off the event, Secretary of State Susan Bysiewicz was on hand to deliver a keynote address to the students and award each a scholarship certificate.

This is the sixth year that Dunkin’ Donuts has administered what has become a very successful scholarship program for Connecticut.

“At Dunkin’ Donuts we are committed to the communities we serve. As a local institution an active community partner we want to encourage educational achievement in every way possible.” said Michael Batista, chairman of the Dunkin’ Donuts franchisee advisory committee.

The students were selected for the scholarship on the basis of a well-rounded character including a positive academic record, and demonstrated leadership in school and community activities. The competition was extremely rigid with over 4,000 Connecticut students registered for the 100 scholarships offered by the Dunkin’ Donuts franchises.

The students winning the award were Lauren Pollack of Avon and Kelly Nedorostek of Canton.