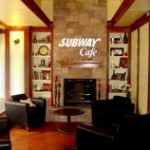 that sandwich giant Subway is testing a more upscale format called Subway Café, which the company hopes will address the needs of franchisees looking to open in office buildings and other more high-end venues.

The test, which was launched by a Subway franchisee in an office building in Alexandria, Va., has expanded to about 15 locations, Les Winograd, a spokesman for the Milford, Conn.-based chain, said in an interview Monday. The company expects to add 10 more by the end of the year, he added.

“The landlord was looking for something more upscale and with more coffee choices in the building,” Winograd said.

The new concept is expected to help fuel Subway’s rapid growth. The chain said it has opened nearly 700 new outlets in 50 countries and 43 U.S. states since January and has plans to open a total of 2,000 North American locations this year.

While still in the early stages of development, the Subway Café is designed to be a cross between a sandwich concept and coffee bar and is “a little larger” than the average 1,200-square-foot Subway, he said.