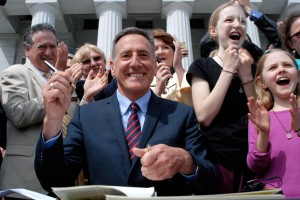 As expected, the Grocers Manufacturers Association (GMA), along with a host of other food industry plaintiffs, filed a lawsuit last week in Burlington, Vermont challenging the legality of the new GMO labelling law and asking the federal court to enjoin implementation of the law.  The GMA, joined in the challenge by the Snack Food Association, International Dairy Foods Association and the National Association of Manufacturers, contends among other charges that the commerce clause of the US Constitution (Article 1, Section 8) prohibits Vermont from regulating nationwide distribution and labeling practices that facilitate interstate commerce, the sole province of the federal government.  In the suit, the GMA calls the labeling law a “costly and misguided measure that will set the nation on a path toward a 50-state patchwork of G.M.O. labeling policies that do nothing to advance the health and safety of consumers.”  A legal challenge was so certain that Vermont incorporated a funding mechanism in the body of the law to allow citizens to contribute to the costs of defending the GMO labeling law.  One company has already taken a position in support of the labeling requirement is Ben & Jerry’s.  The Vermont headquartered ice cream chain has created “Food Fight Fudge Brownie” and contends that all sales of the ice cream flavor will benefit the state’s aforementioned labelling law legal defense fund.